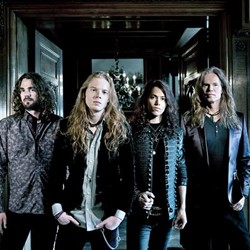 Adrian Vandenberg rose to worldwide prominence with Vandenberg, the melodic rock band that hit internationally with the powerfull ballad “Burning Heart”. Adrian solidified his status as one of the most talented rock guitarists around when he joined David Coverdale’s hard rock supergroup Whitesnake, co-writing many of their Billboard Hot 100 hits, like “The Deeper The Love” and “Now You’re Gone”, and supplying the legendary guitar solo to “Here I Go Again”.

After leaving Whitesnake, Adrian concentrated on his successful career as an artist, exhibiting his paintings in prestigious galleries all over Europe. Music however was always prevalent on his mind, so as soon as he had the opportunity to work with some incredibly talented young musicians, he started creating new music. Joining the guitarist in Vandenberg’s MoonKings are Jan Hoving (vocals), Sem Christoffel (bass) and Mart Nijen Es (drums).

“We are proud to have joined the Mascot family. It’s a great company with fantastic people that love the music they work with,” Adrian Vandenberg enthuses. “The band is raring to go and prove itself to the world, so we’re anxious to finish the album and get it out there and I’m very happy that Ed van Zijl is giving us the opportunity to do so.”