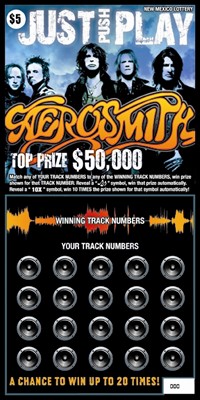 Hard-rock legend Aerosmith is on center stage as a New Mexico Lottery Scratcher.

The extended-play “Aerosmith” game celebrates three of the band’s best works, including power ballad “Dream On.” Prizes are hidden behind 20 images of sheet music and thumping concert amps. Players can win to the tune of $50,000.

“Aerosmith rocks as a Scratcher game,” said Adriana Binns, New Mexico Lottery marketing director. “The band is one of music’s greatest acts and it has fans of all ages.”

In addition to cash prizes, the $5 game offers second-chance drawings to win trips to a party hosted by the band. The exclusive party will be held in September at Cleveland’s Rock and Roll Hall of Fame. Players enter at www.nmlottery.com. Drawings are scheduled for May 11 and June 29.

Formed in 1970, Aerosmith has sold 150 million albums. The band was inducted into the Rock and Roll Hall of Fame in 2001. Rolling Stone magazine has Aerosmith at number 57 on its list of rock’s 100 greatest artists. Recently, the makers of Guitar Hero launched a game devoted to Aerosmith music.

In 2009, the Grammy-winning group extended its brand to Scratcher games licensed exclusively through GTECH Corporation.

The sale of New Mexico Lottery games funds a college scholarship program. Since its inception in 1996, the New Mexico Lottery has raised nearly $427 million for public education and more than 61,000 students have attended college on Legislative Lottery Scholarships. More information about the Legislative Lottery Scholarship program is available at www.nmlottery.com.