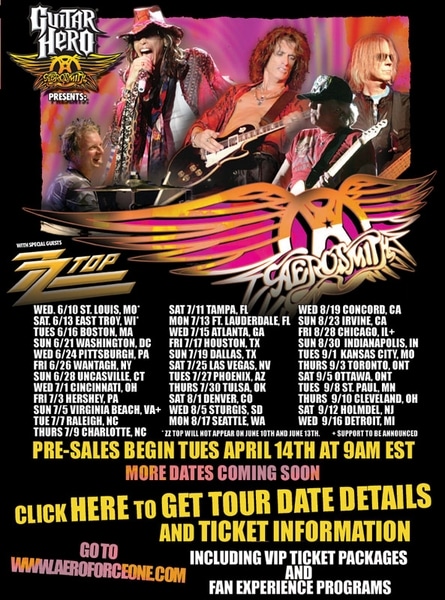 Gary Graff of www.billboard.com reports that Aerosmith and ZZ Top have announced the first dates for their summer North American tour.

As first tipped by Billboard.com last week, the trek, sponsored by Guitar Hero: Aerosmith, begins June 10 in St. Louis and runs through Sept. 16 in Detroit. Some 33 shows (but not venues) have already been announced, with a few more dates expected to be added. ZZ Top will not play the first two shows, in St. Louis and on June 13 in East Troy, Wisc., and a third act will be announced for the Aug. 28 Chicago date.

Aerosmith guitarist Joe Perry told Billboard.com that he’s psyched about being on the road with ZZ Top. “To have to follow them is gonna be a mouthful every night,” Perry said, “and I know it’s gonna kick us into overdrive. That sounds like a cliche, but when you play with a band like that…we’ll be out listening a lot ’cause I love them. I always have. And I love Billy (Gibbon)’s playing.

“So we’ve got our work cut out for us, and the audience gets the benefit.”

Perry said that the groups “have 40 dates kind of on the books right now, and we’ll see how it goes from there.” He held out the possibility of Aerosmith at least continuing into South America and possibly Europe and Japan, but with no firm details. “That’s how we book most of the tours: we kind of take them leg by leg, continent by continent,” he explains.

Aerosmith, which last toured in 2007, has been working on its next album: the group’s first since 2004’s “Honkin’ On Bobo,” but has put it aside in order to concentrate on the tour. Perry is also working on a solo album that he predicted could be ready before the Aerosmith release.