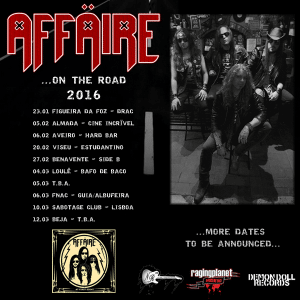 Portuguese sleaze rockers AFFÄIRE have released a video for the song “Devil’s Cross” from their new album At First Sight, which was released in September 2015 via Demon Doll Records.

Sleaze Roxx stated the following in its review of AFFÄIRE‘s album At First Sight: “It’s always a good sign if within a few seconds, you know you are going to like a band. AFFÄIRE play the kind of ’80s friendly glam and/or sleaze metal music that is easily what I want to hear. It feels that the band is serving up my favourite comfort food with the guitar tuned just right.” Sleaze Roxx concluded in its review: “Overall, AFFÄIRE‘s At First Sight is a solid debut album. For reasons that I can’t exactly pinpoint, I feel like the best is yet to come from these sleaze rockers so I am looking forward to hearing what they come up with in the future.”