Portuguese sleaze rockers, Affäire, have released their cover of The Beatles‘ “I Saw Her Standing There” from the group’s latest EP Neon Gods. 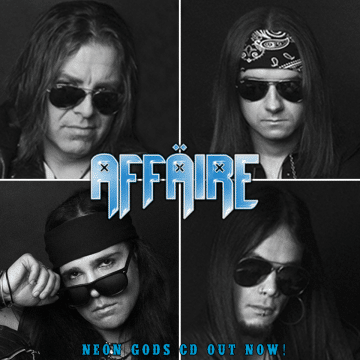 “We’ve just published the official audio of “I Saw Her Standing There”! After years playing Vain‘s “Secrets” live, we’ve decided to challenge ourselves and record our very own sleazy approach to this 60s classic written by The Beatles, which turned out to be the 1st cover-version AFFÄIRE ever recorded….

“Neon Gods” is the follow-up of the band’s debut full-length “At First Sight“, released in the Autumn of 2015, by US label Demon Doll Records. We are currently writing new music for what will be AFFÄIRE new full-length, planned to be recorded next Summer.”

Sleaze Roxx stated the following in its review of Neon Gods and the group’s cover of The Beatles‘ “I Saw Her Standing There”: “Finally, wow. What a great Beatles cover of “I Saw Her Standing There.” I’ve heard other bands try this song, for better or worse.  Affäire interpret the song perfectly, and I give credit to singer Dizzy Dice Mike for not trying to hit that high note on “Woooh” in the chorus. I bet he could have, but the omission adds to the unique quality of the song. This is a solid hard rock cover of a classic tune. What’s the point of doing a cover, if you can’t make it your own?

I wish Affäire could have produced another full length album. I’m told by JP that such a thing is in the works, but he also said the EP has gained a life of its own in Europe, and touring is the band’s first priority, bringing its style of rock to the fans. I wish them the best of luck. What they gave me on this five song EP was stylish and impressive, and left me looking for more.”

Affäire‘s cover of The Beatles‘ “I Saw Her Standing There” song:

AFFÄIRE – I Saw Her Standing There