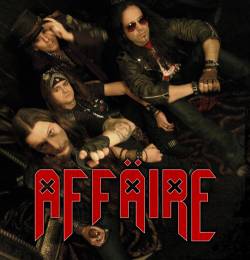 Unlike what the 1990’s music trends and industry dictatorship tried to establish, Rock ‘n’ Roll doesn’t have to be self-pitiful, innocent and pale.

After years of stage and studio work, members of renowned acts within the Portuguese scene like Dawnrider, Divine Lust and Attick Demons eventually clashed with each other and decided to team-up. Under the Affaire moniker, J.P. ‘WildHearted’ Costanza (drums), Rick Rivotti (guitar) and Tony ‘Rattlesnake’ Misfortune (bass), fulfilled an urge they’ve had since their teenage days and come up with the band that Portugal has owed to the world since the ’80s. Shortly after that, Filipe ‘Rooster’ Cascata was announced as Affaire’s new singer.

In late 2011 Affaire’s debut single “Born Too Late”, backed by “Japanese Teaze”, was released in 7″ vinyl format, limited to 300 hand numbered copies, and now it can be purchased/previewed at www.facebook.com/affairerocks, affairerocks.bandcamp.com and www.reverbnation.com/affairerocks.

Four restless characters driven from ’70s punk rock street decadence, fuelled by a NWOBHM rush, and finally crashing on the Sunset Strip glamour and sleaziness, Affaire was born too late yet proudly raises their middle-fingers to the music trends and to whatever the next-big-thing is. No ‘nu’! No ‘alternative’! No shame!