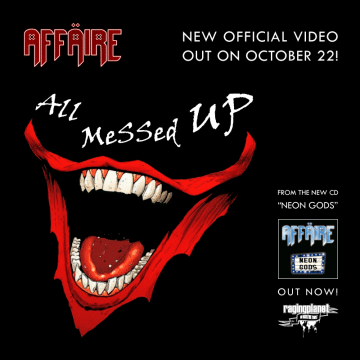 Portuguese sleaze rockers Affäire have released a video for their song “All Messed Up” from their latest EP Neon Gods, which was released on May 15, 2017.

Sleaze Roxx stated the following in its review of Neon Gods: “With the newly released Neon Gods, Affäire look both back and forward, presenting solid ’80s style sleaze for a new generation. [Drummer] JP Costanza told me about choosing a studio and an equipment rack offering an organic sound “…with a “warm ’70s vibe”… combined with a “lethal” or “sharpened” feel to the overall concept according to JP. Much like Crazy Lixx, Hell In The Club, or The Last Vegas, Affäire don’t try to be today’s Crüe, Ratt, or Skid Row. Instead, they recognize the best of each band, and attempt to expand on those points. Affäire succeed way more than not.

As I’ve said before, it is difficult to create an overall opinion of a band based on a five song EP…. four songs plus a cover. And yet, on Neon Gods, after two tracks, you already know what you’re in for. Title track “Neon Gods” and the second song “All Messed Up” are good listens. Aggressive and powerful, as our brand of sleaze is, I can’t call them over-the-top…”

Affäire‘s “All Messed Up” video: