Airbourne announce the completion of their next album

Great news for Airbourne fans as the Aussie hard rockers have completed their next studio album. 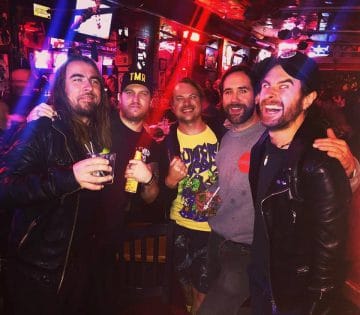 Sleaze Roxx stated the following about that latter finish: “

“Frankly, I thought that Airbourne‘s Breakin’ Outta Hell might well take the #1 spot on the Sleaze Roxx Readers’ Top 20 Albums of 2016 but finishing #4 is still very impressive. It’s actually the highest finish for the Aussie rockers on the Sleaze Roxx readers’ year end lists with the band inching a little higher each year given that Runnin’ Wild finished at #12 in 2007, No Guts, No Glory ended up at #9 in 2010 and Black Dog Barking finished at #7 in 2013. Although Airbourne have often been compared to Aussie giants AC/DC, the fact is they play a much faster and rougher version of rock n’ roll than the latter. I think the one true common denominator between both bands is that they are very consistent from one album to the next refusing to reinvent the wheel and just delivering the goods time and time again. Off the top of my head, I believe that Airbourne is also the only band to ever have its first four albums featured on the Sleaze Roxx readers’ year end lists, which speaks volumes about how good the group’s music really is and that consistency which I have already alluded to. Will Airbourne‘s next studio album capture top spot on the Sleaze Roxx readers’ year end list? Only time will tell but I wouldn’t bet against it!”