Aussie rockers Airbourne are currently embarked on a comprehensive tour of Europe that includes a number of rock festivals that started on July 17, 2019 in the UK and scheduled to end on November 10, 2019 in Germany (see poster with dates below). The group has just announced that its tour is being extended with UK dates from November 13 to 30, 2019 with opener Tyler Bryant & The Shakedown for those latter tour dates. Back in late April 2019, Airbourne announced that they had completed their next studio album and the follow up to their 2016 record Breakin’ Outta Hell. 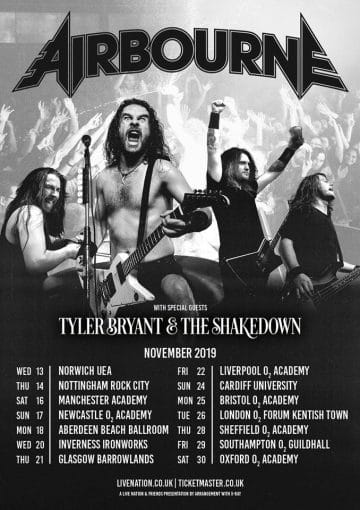 With Tyler Bryant & the Shakedown

Sleaze Roxx stated the following in its review of Airbourne‘s concert in Minneapolis, Minnesota, USA on October 11, 2016: “This is my second time seeing Airbourne and I don’t know where they get their energy. They are non stop from the second they hit the stage until the final notes of their last song. They take the AC/DC formula, turn it up a notch and definitely make it their own. My only complaint of the night was their short set of eleven songs. It seemed they were done before you knew it, but that also means they were that entertaining too.” 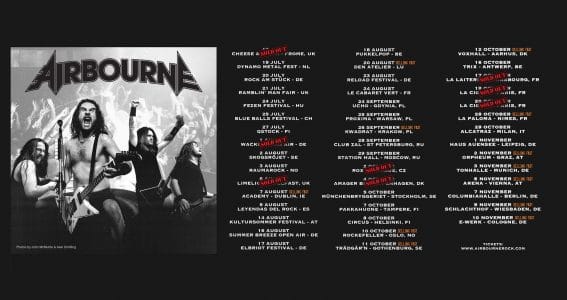