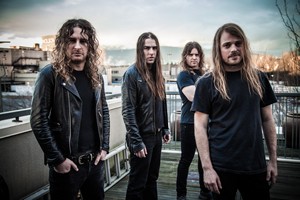 Airbourne Returning With ‘Black Dog Barking’ On May 21st

Australia’s Airbourne will release their third album, ‘Black Dog Barking’, on May 21. Produced by award winning producer Brian Howes (who’s also worked on albums for Hinder and Puddle of Mudd), this is the follow-up to 2010’s ‘No Guts. No Glory’.

Inspired by the likes of Judas Priest, Thin Lizzy, AC/DC and Motorhead, Airbourne has been winning fans since 2003 with their high-energy, whiplash-inducing, workingman’s rock ‘n’ roll. Their first album ‘Runnin’ Wild’ was named 2007 Album of the Year by SleazeRoxx.com, Best Debut Album at the 2008 Metal Hammer Golden Gods awards, and Spin said “Runnin’ Wild, Airbourne’s debut, is a smorgasbord of sledgehammer riffs, crass sex puns, and boozy sing-alongs.”

Hailing from Warrnambool, a small drinking town on the southwestern coast of Victoria, Australia, Airbourne — vocalist/lead guitarist Joel O’Keeffe, drummer Ryan O’Keeffe, guitarist David Roads, and bassist Justin Street — has gained an immense following with their explosive live shows and main stage festival appearances including a headliner spot at Wacken 2011, Rock Am Ring/Park (Germany) and Download (UK). It’s been a long year and a half for Airbourne since coming off the road mid-2011 to work on ‘Black Dog Barking’. Said the band, “A lot of thought and effort has gone into this record not only by the band, but by the production crew who worked countless hours, seven days a week, even through Christmas and New Year’s Eve to achieve the best possible performances, backed by real undying tones. Now we’re handing it over to you…so crank it up, crack a beer and stick some rock ‘n’ roll in your ear!”

But that’s not all… Six Flags Entertainment Corporation, the world’s largest regional theme park company, and Roadrunner are proud to announce a new partnership, including the first-ever release of an original song created for a roller coaster. The Full Throttle edition of Airbourne’s new song “Live It Up”, the first single from ‘Black Dog Barking’, will be released for the opening of Full Throttle at Six Flags Magic Mountain in Valencia, California, the tallest, fastest looping roller coaster in the world.

The song will be released to rock radio in late spring, followed by its in-park debut at Six Flags Magic Mountain with the ride opening. The Full Throttle edition of “Live It Up” will be featured throughout the newly themed five-acre section of the park, where guests will experience high-energy action through fast-paced imagery, sound and lights, with additional music by various Roadrunner artists. The launch will be further supported nationally in all theme parks, Roadrunner and Six Flags online and social media channels, live events and press outreach.

“Theme music is synonymous with television, movies and even sports. It’s a natural extension to bring original music to a world-class roller coaster, like Full Throttle,” said David McKillips, Senior Vice President of Corporate Alliances, Six Flags Entertainment. “Roadrunner Records had the creative vision and talent to match the heart-pounding speed and adrenaline the ride experience delivers, backed with a content partnership that provides best-in-class entertainment to our guests.”

In addition to the song’s release, Six Flags and Roadrunner will be working together on programming to be featured on Six Flags digital networks, which includes the Nielsen-measured Six Flags Television Network. The content partnership will air Roadrunner videos in ride-line televisions and help drive awareness, music downloads, and sales for Roadrunner’s breadth of rock artists.

“This is an innovative partnership that brings together two great brands and allows Roadrunner to bring music to millions of entertainment-seeking consumers in a new way,” said Michael Easterlin, General Manager of Roadrunner Records. “Six Flags’ ability to generate awareness through the Full Throttle attraction and its national media network provides a unique outlet for fans to instantly access our music.”