Great news for Airbourne fans as the Aussie foursome will be releasing their fourth album entitled Breakin’ Outta Hell sometime in the future as well as embarking on a tour of the US and Canada in the fall of 2016. 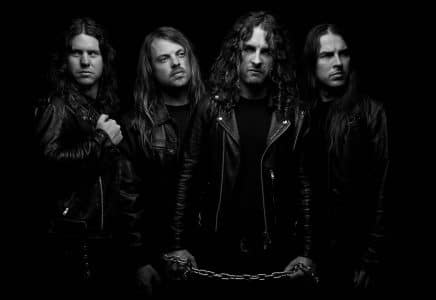 Airbourne – unswerving, clenched-fist champions of the hard rock cause- have confirmed their new album title, Breakin’ Outta Hell, also the title of the first single/video, along with a headline tour of North America for September and October; the tour kicks off in San Diego on September 12 and concludes in Baltimore on October 14, taking in 21 shows along the way.

Driven by a formidable work hard, play hard ethic, the Australian outfit (led into action by brothers Joel and Ryan O’Keeffe, vocalist/lead guitarist and drummer, respectively; guitarist David Roads and bassist Justin Street complete the line-up) have spent the past 10 years establishing themselves as a true force of nature: living on the road, selling out major venues and appearing on bills with some of rock’s most legendary names, and this latest North American run will only add to their reputation for incendiary live performances -maximum energy, maximum entertainment.

Airbourne will launch their latest, fourth studio album, produced by Bob Marlette (who helmed the band’s Runnin’ Wild debut in 2007) and engineered and mixed by Mike Fraser, who has previously worked with Aerosmith, Van Halen, Metallica and more, worldwide this fall via a new deal with Spinefarm Records.” 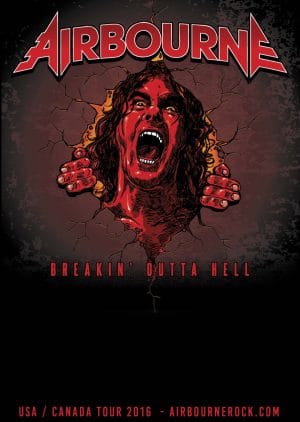 Airbourne‘s third album Black Dog Barking landed the #2 slot on Sleaze Roxx’s Top Ten Albums of 2013 as well the #7 position on the Sleaze Roxx Readers’ Top 20 Albums of 2013. Sleaze Roxx stated in regard to Black Dog Barking: “After the slight hiccup that was ‘No Guts. No Glory.’ it would have been easy to write Airbourne off as a band whose best days were in their rearview mirror. Then came ‘Black Dog Barking’, a flawless album from top to bottom that proved this ‘dog’ still had some bite and several tricks up its sleeve. Power and aggression is the blueprint for Airbourne‘s sound and the Australian head-bangers didn’t disappoint — in fact, in their short existence they have already inspired countless copycats. If the majority of hard rockers were able to capture the energy of Airbourne the genre would be unstoppable.”