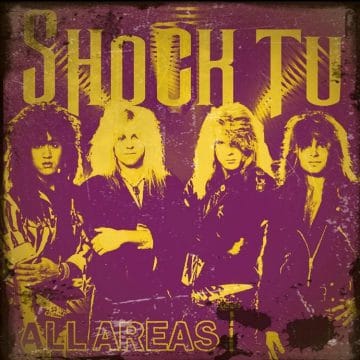 Demon Doll Records‘ website indicates (with slight edits): “Who’s ready for round 3? Joey C. Jones and Demon Doll are at it again, we proudly bring you the 80’s super group featuring members of Sweet Savage, The Godz and Lillian Axe.

In October of 1988, Joey C. Jones of Sweet Savage, Rick Soga and Danny Boyd of The Godz along with wunderkind Jim Miller created such a buzz that their first show as Shock Tu sold out the legendary Alrosa Villa in Columbus, Ohio. Later they would add Ken Koudelka (Lillian Axe) on drums and Les Farrington (Sugarbomb) on keys and vocals to round out the line-up. As a unit they performed over 300 shows in 3 years and recorded 16 songs, 12 of which can now be heard on the brand new release ‘All Areas’ from Demon Doll and Metal Legacy Records.

All of the attention landed the band a management and recording deal with Marshall Berle (Ratt), who wanted to bring in legendary producer Tom Werman (Motley Crue, The Cars, Poison) to take the reins behind the board. When given the choice of musicians to work with, Jones jumped at the opportunity to work with his childhood idols, Cheap Trick; shortly thereafter financial negotiations with Werman broke down and Jones requested that the 16-song demo be sent directly to Cheap Trick‘s management. As a result, Rick Nielsen and Robin Zander loved the demo, took over production and recorded 10 songs, including two penned by the Cheap Trick duo and Fee Waybill of The Tubes.

By the time 1990 rolled around, the album was 80% complete and over budget which left Shock Tu and Cheap Trick’s management with the struggle of financing the masters. Before the tapes were destroyed, Jones obtained a copy on casette from Nielsen and now with the help of Demon Doll, the recordings produced by the power pop legends are finally available restored & remastered and ready to be unleashed onto the world!

This album comes packaged in an 8 page booklet with lyrics to the 10 main tracks.

This CD is silver pressed, officially licensed from the band and exclusively available through Demon Doll Records.”