FnA Records has unearthed another gem from the past by releasing an album titled Love On The Rox from 1980s era AOR melodic rockers Rage n’ Rox. 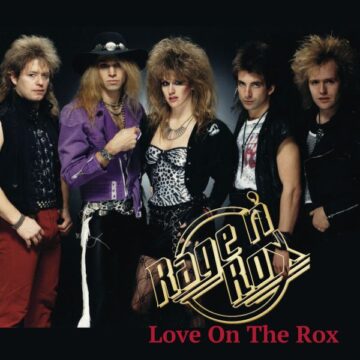 “Rage n’ Rox was a 1980’s rock band from Portland, Oregon that toured around the Northwest for many years. They frequently played at the world famous “Wave” nightclub in Waikiki, Hawaii.

The band is led by front-woman Tamara Deems who gives the sound, a brilliant mixture of Heart and Pat Benatar. The remaining four members are Gordy Deems aka Georgia on lead and rhythm guitars, John Field on keyboards, Eric Kruegar on bass guitar, and Greg Oberst on drums.

Rage n’ Rox recorded an EP in the late 80’s and due to the success of the EP and the bands rising popularity, they entered the studio and recorded 5 more tracks, with all 10 tracks making up the Love On The Rox album. The album is being released by FnA Records, one of the leading retro labels in the hard rock industry. Radio friendly songs like “Drive It In” and “How Can You Do It” were welcomed onto the radio in many cities and overseas; The direction of the music was a bit more pop/rock oriented in keeping with the changing market and brought the band more into the commercial arena, and Rage n’ Rox really hit the road hard.

Although a major label deal fell through in the end, this dynamic group featured wonderful musicianship and a powerful stage show that drew large crowds and loyal fans for years. The original members continue to play music in various bands in the Northwest today.

Love On The Rox is a 10 track, silver pressed CD, and is available as a CD, Fan-Pack CD, and digital download. The Fan Pack is autographed by Tamara & Gordy.

Love On The Rox CD can be purchased at: www.fnarecords.net.

The video for “How Can You Do It” is available to watch below:

The teaser is available to listen to below: