The M3 Rock Festival in Columbia, Maryland, USA will apparently have some new faces performing in 2022 as Canadian rocker Aldo Nova has announced that he will be part of the line-up on May 8, 2022. Given that May 8th is on a Sunday, it appears that the M3 Rock Festival will be a three day event again like last year. Traditionally, the M3 Rock Festival announces its official line-up for the upcoming year in or about early December. 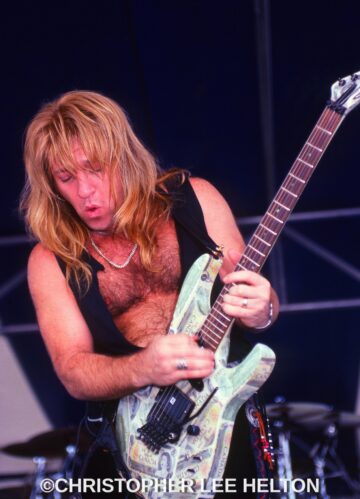 “65 years ago 1 took my first breath on November 13th, 1956, and today on November 13th, 2021 is the day of my rebirth, so 2 birthdays on the same day. Finally, a solid schedule and this is it. January 11th, 2022, I release my 1st song and video to my song Free Your Mind with press handles by Mitch Schneider and Marcee Rondan of SRO PR who also handle Ozzy so a huge press release. Then on February 22nd, 2022, I release the second song and video to my song Burn Like The Sun, again with a huge press release, then on March 29th, of 2022 I release my 3rd video and single to my song King of Deceit which will also have huge press coverage.

Then on April 1st, 2022 the 40th year anniversary of the release of my multi-platinum, now considered a classic album titled Aldo Nova which was released on April 1st, 1982, I finally release my 10-song E.P. a Preview to my 25-song 2-hour, and 15 minute Rock Opera, “The Life and Times of Eddie Gage” which will be available when I think that the fans are ready to absorb 2-hours and 15 minutes of what is, in essence, my autobiography in music because Eddie Gage is the name of my alter ego to make things a little clearer for you. But if it would’ve really been the autobiography of my Life, 65 years multiplied by 24 hours a day wouldn’t be nearly enough music to cover it.

Then on April 19th, 2022 I release Aldo Nova 2.0 Reloaded which is made up of some of my biggest songs taken from my 1st album, Aldo Nova, my 2nd album, Subject, and Blood on the Bricks but turbocharged to the Nth degree. Be careful when you’re driving listening to Reloaded because you’ll get the feeling that your car has nitro in the gas tank, so watch out for state troopers..lol, The thing about Reloaded which makes it special is that since I own everything on it because at 65 I’m not a slave to the system and I make my own rules, I’ve decided to make it a 2 disc set which consists of disc 1 that has all the song as they were recorded, then on disc 2 is where I screw the entire music industry and change the way music will be forever sold, and it’s simple.

Since I own everything, disc 2 will consist of all the songs but with versions that will have my full tracks but with no Lead Vocal and then also versions of all the songs with no Lead Guitar on them, something that no artist on the planet has ever done and will probably never do because they’re only interested in making money and don’t give a shit about the fans. I on the other hand have realized that it’s because of you that I can pay my mortgage and feed me, my wife Sylvie, my cat Daisy, and my Yorkshire Terrier, Roxy so I wanted to give you something to thank you by giving you the chance to do supercharged karaoke with me, Aldo Nova as your backing band, and also I encourage young and old guitar players to jam with me to either play my solos or to do what my intentions were and that is for guitar players to jam and use my tracks and me as your backing band to create and develop your own style and innovate and not imitate as I do.

Then in June, having bought back the master to my album Nova’s Dream and re-sequencing it and having Bob Ludwig, a living “legend”(Who has mastered all of the albums) master it so it sounds out of this world will re-release it since the album isn’t really known but is a gem of an album which is instrumental where I completely let my creativity loose and it showcases some of my best guitar playing ever recorded.

Then I start my world tour at the M3 festival on May 8th, 2022, so don’t miss out and see me and my new band of gunslingers rock the world.

And then, before I do all of that, my wife will tell me to take out the garbage and the recycling also..lol