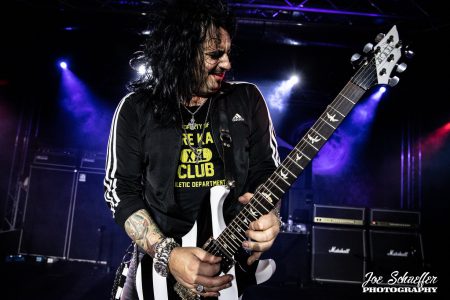 Grossi was asked whether there was a divide or mixed reaction with all in the new members in the last few years to which he replied: “Any time something changes, people are gonna have an opinion, and that’s cool – If you don’t like it, don’t buy a ticket. We have been getting a really good response so far, it’s really been great and we are all very grateful to be out doing this. As for the internet snipers and their reactions, I always laugh when these guys say that we should, “Call it a day” and “Nobody cares,” and then discuss us to get clicks on their Wayne’s World level “Metal Classic Show Podcast.” It’s hilarious. if you look at John Kelly, and Jizzy Pearl and say, “That’s not a good lineup of players,” you need to get your eyes and ears checked. [Laughs].”

In terms of whether Quiet Riot‘s current line-up is strong enough to hold water to the band’s earlier incarnations, Grossi opined: “I wouldn’t say it’s about “holding water.” We are simply continuing a legacy, and I’ve got news for you – if Kevin Dubrow’s and Frankie Banali’s passing hasn’t stopped Quiet Riot from successfully carrying on, and celebrating the legacy, whether you like it or not, I don’t think anything will.”

In regards to what’s next for Quiet Riot, Grossi revealed: “All I am going to say is that we made very good use of the pandemic downtime and that fans are going to be very happy, and pleased with where things are headed. We’ve got a bunch of new music ready to go, we’re just picking the right time to release it.”

You can read the rest of the interview with Alex Grossi at Vinyl Writer Music‘s website.