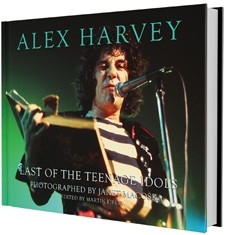 An elegant hardback photobook marking the 30th anniversary of Alex Harvey’s passing, containing exclusive unseen photographs of Alex on and off stage with bandmates and friends, will be released as a limited-edition title on February 4th, 2012 (Alex’s anniversary) at www.alexharveybook.com.

Alex Harvey, known to many as ‘the last of the teenage idols,’ took his band from the slums of 1960s Glasgow to the stages of the world. Their unique brand of Vaudeville-inspired concerts and theatrical musical compositions made them one of the most respected live acts of the era.

Their onstage energy was so powerful it brought fans of Slade, the Who, and many others to heel. They opened the Reading festival in 1973 and headlined it in 1974 – the first band to perform such a feat. They even survived the punk revolution, when leading lights including the Sex Pistols proclaimed their admiration for Alex. SAHB were the darlings of the celebrated TV show The Old Grey Whistle Test and, in the mid-1970s, they were the biggest-grossing live act in the UK.

Alex inspired confidence and faith – he was seen by some as a big brother, by some as an uncle, and by others even as a sex symbol. But with his message of peace and friendship (“Don’t make any bullets, don’t buy any bullets, don’t shoot any bullets – and don’t pish in the water supply”) he represented a better future, presented in the medium of explosive rock shows and albums.

Now Janet Macoska, that Cleveland photographer, and Martin Kielty, that Glasgow journalist, have collaborated to produce a limited-edition photobook: their own personal tribute to a man who changed their lives for ever.

It includes never-before-seen pictures of Alex, his band and crew, on and off stage, from the first time Macoska met them in the US in 1974 to Alex’s life after he left SAHB. The full-colour hardback volume includes shots of the band’s final show together at Reading in 1977, candid images of Alex at home, and extended captions in which Macoska explains the context of each set of pictures.

Macoska currently works with the Rock And Roll Hall of Fame Museum in Cleveland. Her material has featured in publications as diverse as Rolling Stone, Vogue, the New York Times and the London Times, and in album artwork by Led Zeppelin, David Bowie, the Clash, AC/DC and many others.

She says: “This is the book I’ve waited my whole life to do. Alex Harvey gave me my first paying photography job in rock and roll and set me on the path for my career of nearly 40 years. He was my mentor, and SAHB were legends. Finally, I can share these photos and stories with SAHB fans, friends and family.”

Kielty wrote SAHB Story, the band’s authorised biography, in 2004, and went on to manage them, overseeing a new generation of concerts long after Alex’s passing, and helping release their first album in three decades plus their only live DVD to date.

He says: “How many coincidences happen in a row before you conclude it’s more than that? I was born the day SAHB played their first gig. My first book was about them and my first real management job was with them. Even though I never met Alex he’s had an incredible influence on my life. Working with Janet is another coincidence. It came from an off-the-cuff email, but the entire process has been as smooth as if we’d been collaborating for years. Almost all of our ideas worked first time, and even when we discussed changes we didn’t pass a cross word. After 20 years in journalism I can confirm that’s more than coincidence.”

Alex Harvey: Last of the Teenage Idols will be published by Noisewave on February 4, 2012 – the 30th anniversary of the acclaimed artist’s death. The title is only available by personal order.

The life of Alex Harvey will be celebrated at the People’s Palace, Glasgow, on February 4 and 5, 2012. It includes the planting of a memorial tree, a talk given by Alex Harvey Jr and SAHB bandmates Zal Cleminson, Chris Glen and Ted McKenna, plus an exhibition of memorabilia which will remain on display after the weekend.