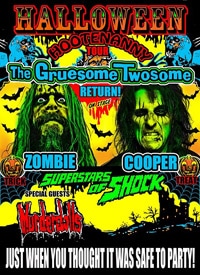 Back by popular demand, masters of the diabolical Rob Zombie and Alice Cooper will reunite for The Halloween Hootenanny Tour featuring the Gruesome Twosome with special guests (and Zombie labelmates) Murderdolls. The tour kicks off in Los Angeles at the Gibson Amphitheatre on Thursday, September 30th (please see below for tour dates). The pair recently shared the stage for a highly-successful, sold-out limited North American run earlier this year and have long been fans of one another, as well as good friends. The Billings Gazette declared, “Thousands of fans got the show of a lifetime…With elaborate multimedia stage shows and classic fist-pumping anthems, both artists brought much more to the stage than their music…the multi-sensory experience of the show will likely not be forgotten.” Charlotte’s Creative Loafing stated, “Zombie was a wildman – running around stage, flipping his hair in every way and stomping away to rev the crowd into a frenzy…Two fantastic performances…” Drummer Joey Jordison will be doing double-duty on the dates, playing drums with Rob Zombie, as well as playing guitar with his own band, special guests Murderdolls.

In other Zombie news, fans will soon get the ultimate interactive experience as their hero is joining forces with Universal Studios Hollywood to create the new 3D maze, “Rob Zombie’s House Of 1000 Corpses: In 3D ZombieVision.” As part of the Halloween Horror Nights event, fans will be treated to a nightmarish world of carnage and chaos Rob Zombie-style based upon Zombie’s cult hit film “House Of 1000 Corpses.” Vampire buffs also got a treat when the track “What” from Rob Zombie’s latest release HELLBILLY DELUXE 2 appeared in an episode of the smash HBO series “True Blood.”

Zombie enthusiasts can also look forward to the release of the special edition of HELLBILLY DELUXE 2. Set to street on September 28th, this deluxe version of HD2 will feature 3 brand new tracks called “Everything Is Boring,” “Michael” and “Devil’s Hole Girls And The Big Revolution,” as well as a reimagining of “The Man Who Laughs.” In addition, the package will include a brand new video for “Mars Needs Women” (shot during the Gruesome Twosome tour with Alice Cooper), a live version of Cooper’s classic “School’s Out” with Cooper and a 30-minute DVD featuring a tour documentary entitled “Transylvanian Transmissions,” along with all-new expanded artwork.

With more than 15 million albums sold, 7 Grammy nominations, the helming of 5 major motion pictures and dozens of music videos under his belt, Rob Zombie is a force to be reckoned with in today’s entertainment landscape. Zombie’s unique meld of horror and hard rock has influenced his sound as a musician, and more recently his vision as a director and writer.

Lock up your daughters, because Murderdolls will be embarking on their first tour in over half-a-decade. The tour arrives just in time for the band’s brand new album WOMEN AND CHILDREN LAST, which hits stores on August 31st and is also their first release in eight years. Joey Jordison and frontman Wednesday 13 will show no signs of road rust, as they dive back onto the stage, cranking out their ghoulishly glammy punk rock. Jordison plays guitar in Murderdolls, so he will most certainly be firing on all cylinders on this tour. The Murderdolls played a pair of much ballyhooed shows in Los Angeles in June; the shows incited so much interest that fans were calling the venues from all over the globe, clamoring for more information and details the moment the shows were announced. While the ‘Dolls have already invaded the UK – where they can sell out 5,000-capacity venues – they’ve got the US in their sights on The Gruesome Tour. Consider this fair warning!