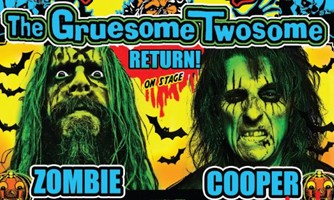 The masters of musical mayhem have paired up yet again to embark on a three week tour of debauchery. Rob Zombie and Alice Cooper have returned to destroy a city near you on The Halloween Hootenanny Tour with special guests Murderdolls. The tour kicks off in Los Angeles at the Gibson Amphitheatre on Thursday, September 30th and will criss-cross the USA with a tour de force of ghoulish s delights for your aural pleasure, giving the fans a show of a lifetime.

In other Zombie news, fans will soon get the ultimate interactive experience as their hero is joining forces with Universal Studios Hollywood to create the new 3D maze, “Rob Zombie’s House Of 1000 Corpses: In 3D ZombieVision.” As part of the Halloween Horror Nights event, fans will be treated to a nightmarish world of carnage and chaos Rob Zombie-style based upon Zombie’s cult hit film “House Of 1000 Corpses.” Vampire buffs also got a treat when the track “What” from Rob Zombie’s latest release HELLBILLY DELUXE 2 appeared in an episode of the smash HBO series “True Blood.”

Zombie addicts can also look forward to the release of the special edition of HELLBILLY DELUXE 2 set to street on Friday, September 24th. This deluxe version of HD2 will feature 3 brand new tracks called “Everything Is Boring,” “Michael” and “Devil’s Hole Girls And The Big Revolution,” as well as a re-imagining of “The Man Who Laughs.” Additionally, the package will include a brand new video for “Mars Needs Women” (shot during the Gruesome Twosome tour with Alice Cooper), a live version of Cooper’s classic “School’s Out” performed with Cooper and a 30-minute DVD featuring a tour documentary entitled “Transylvanian Transmissions,” along with all-new expanded artwork.

With more than 15 million albums sold, 7 Grammy nominations, the helming of 5 major motion pictures and dozens of music videos under his belt, Rob Zombie is a force to be reckoned with in today’s entertainment landscape. Zombie’s unique meld of horror and hard rock has influenced his sound as a musician, and more recently his vision as a director and writer.