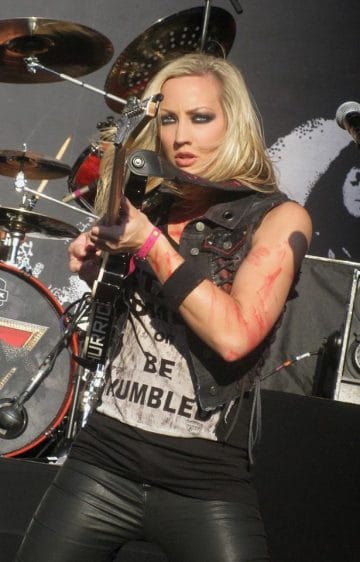 The following message was posted on Strauss‘ Facebook page yesterday:

As you guys may or may not know by now, for the past year or so I’ve been focusing on writing and putting my band together, and while I always thought about making a solo album, I thought my energy would be better spent right now focusing on giving the band my all and making those songs as great as they could be.

But when Steve Vai asked if I’d be a part of this compilation, you better believe I jumped at the chance!!!! I’ve always loved instrumental guitar music, and to step into this world for the first time and get to do it on Favored Nations Entertainment alongside the other badass girls on the She Rocks album, is an honor and a privilege.

I’m extremely grateful to Steve Vai, Brad Tolinski and Laura B. Whitmore for including me on this compilation!! And I have a feeling this isn’t the last instrumental music I’ll be writing ?

Last but most definitely not least, thank you to two of the most talented musicians I know, Josh Villalta and Katt Scarlett, for playing drums and keys on this and helping me realize my musical vision in ways I wouldn’t have been able to do myself!!!”