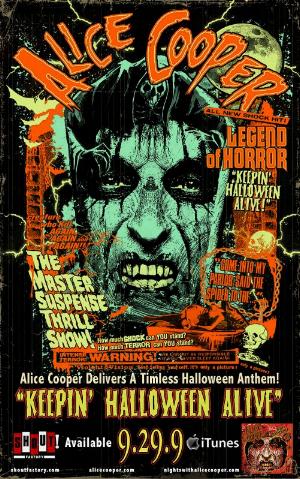 Under its agreement with Cooper, Shout! Factory will be the exclusive digital media distributor for Alice Cooper’s new single, “Keepin’ Halloween Alive,” as well as the track’s bonus Karaoke (aka “Cooperoke”) version for digital music downloads.

Alice delivers the song with the garage-punk snarl he is best known for, ensuring that it will soon be a Halloween classic. “At home my family all gathers around an old spooky tree decorated with skulls and bones in the living room, and we exchange gifts,” says Cooper. “It’s our holiday. We even all have matching black-and-orange Halloween sweaters! I wanted a theme song for people like me, and for us Halloween never ends. In the chorus I say, ‘I’m keepin’ Halloween alive, baby, 3-6-5’… and I mean it!”

“Keepin’ Halloween Alive,” was co-written and co-produced by Cooper with Piggy D. (a member of Rob Zombie’s band), who played rhythm guitar/backup vocals. Dave Pino (Powerman 5000) is featured on lead guitar, and David Spreng (Bob Dylan, The Bravery) on drums. Of the recording, Cooper says, “We played it live as a band to capture the vibe. It was the easiest work I think any of us have ever done, not to mention a blast!”

“We are thrilled to be working closely again with the legendary Alice Cooper on his new Halloween-themed single and adding to Shout! Factory’s expansive digital audio library,” said Bob Emmer, Shout! Factory founding partner and COO. “Throughout his long and storied career, Cooper has always been a master entertainer and a consummate showman. His connection to the dark and spooky holiday is definitive. It’s great to be working with him as he is crowned the King of Halloween.”

In addition to releasing the new single, Cooper is busy hosting his “Nights with Alice Cooper” radio program, now syndicated on more than 100 stations worldwide and staying on the road with his Theatre of Death world tour.

Shout! Factory is a diversified entertainment company devoted to producing, uncovering and revitalizing the very best of pop culture. Founders Richard Foos, Bob Emmer and Garson Foos have spent their careers sharing their music, television and film faves with discerning consumers the world over. Shout! Factory’s DVD offerings serve up classic, contemporary and cult TV series, riveting sports programs, live music, animation and documentaries in lavish packages crammed with extras. The company’s audio catalogue boasts GRAMMY-nominated boxed sets, new releases from storied artists, lovingly assembled album reissues and indispensable “best of” compilations. These riches are the result of a creative acquisitions mandate that has established the company as a hotbed of cultural preservation and commercial reinvention. For more on Shout! Factory, visit www.shoutfactory.com.