Born again Christian Alice Cooper and his wife Sheryl recently made a visit to the Northeast Ohio Church in Chagrin Falls, Ohio, USA where he spoke  about straying away from church and becoming an alcoholic and drug addict as reported by Fox 8 Cleveland. 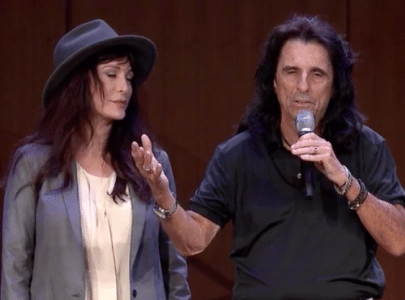 Cooper stated to the church congregation: “I went as far away from the church as I could and of course I became an alcoholic; I became a drug addict and Sheryl lived through that with me.”

Wikipedia indicates the following about Cooper‘s drug and alcohol abuse, and religious beliefs:

In 1986, Megadeth opened for Cooper on his US Constrictor tour. After noticing the abuse of alcohol and other drugs in the band, Cooper personally approached the band members to try to help them control their abuse, and he has stayed close to front man Dave Mustaine, who considers Cooper to be his “godfather”. Since overcoming his own addiction to alcohol in the mid-1980s, Cooper has continued to help and counsel other rock musicians with addiction problems. “I’ve made myself very available to friends of mine – they’re people who would call me late at night and say, ‘Between you and me, I’ve got a problem.'” In recognition of the work he has done in helping other addicts in the recovery process, Cooper received in 2008 the Stevie Ray Vaughan Award at the fourth annual MusiCares MAP Fund benefit concert in Los Angeles.

During an interview with Johnnie Walker on BBC Radio 2 in September 2007, Alice said that he was not a Christian when he gave up drinking, but stated that he thanks God for “taking it away”, saying, “I mean if He [God] can part the Red Sea and create the universe, He can certainly take alcoholism away from somebody.” Although he originally did not speak publicly about his religious beliefs, Cooper was later vocal about his faith as a born-again Christian.”