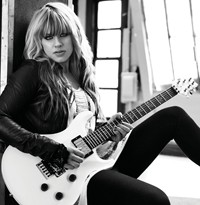 Alice Cooper has announced that eminent guitar prodigy Orianthi will join his band, replacing departing guitarist Damon Johnson, for the next leg of his 2011 ‘No More Mr. Nice Guy’ world tour starting September 22,2011 in Auckland, New Zealand. Currently in progress, the tour hits ninety plus cities, covering five continents, including Europe and North America twice over.

At the young age of 26, Orianthi has already experienced what most aspiring musicians only dream of. She’s opened for her hero, Steve Vai; backed Carrie Underwood; traded solos with Carlos Santana; shared the stage with the King of Pop Michael Jackson and accompanied Alice during his live performance of “School’s Out” on the 2010 season finale of American Idol.

“It’s very difficult to find someone to match the talents of Damon Johnson,” commented Cooper, “but not only did we find someone who is more than up to the challenge… she also looks WAY better.”

“I’m super excited to go on tour with Alice,” said Orianthi. “It’s a huge honor to be able to get on stage and jam with an icon.”

Orianthi will debut with the band for a performance on the Tonight Show with Jay Leno, Friday September 9, 2011 on NBC.

View a full list of tour dates at alicecooper.com/tour-terror.