ALICE COOPER’S ‘ALONG CAME A SPIDER’ DUE JULY 29TH:

“There are only a handful of rock artists that have proven to be as enduring and influential as Alice Cooper has over the years. Name just about any hard rock artist, and they’ve probably borrowed a thing or two from Alice. And on his latest studio recording, ‘Along Came A Spider’ (issued via SPV Records on July 29), Alice has returned with a concept album with a sinister streak.

‘A dark and menacing album for dark and menacing times’ is perhaps the most fitting description for Alice’s 25th studio album overall, as a chilling conceptual thread runs through the songs, which are told through the voice of a serial killer named Spider – one that Alice describes as “an arachnophobic psychopath” (in the song “Catch Me If You Can”). Alice, the master storyteller, weaves a web of danger, intrigue and death that rivals his best work.

Co-produced by Danny Saber, Greg Hampton and Alice himself, ‘Along Came A Spider’ manages to marry both vintage and modern day Alice. As theatrical as ever, the album is a sonic combination of familiar Alice musical elements from albums as diverse as ‘Billion Dollar Babies’ and ‘Brutal Planet,’ with the storytelling of “Welcome To My Nightmare,” capturing the historic dark side of Alice in peak form, an instantly recognizable presence that will be welcomed by his fans. Joining Alice on the album are members of his touring band – longtime Alice drummer Eric Singer, bassist Chuck Garric, and guitarists Keri Kelli and Jason Hook, with additional contributions from others, including Saber, Hampton, and renowned backing vocalist Bernard Fowler.

Saber and Hampton co-wrote several of the album’s songs with Alice, while others were collaborations with Alice’s band members. Danny Saber, best known for his role as member and producer of Black Grape, has also worked with many other artists, including the Rolling Stones, Ozzy Osbourne, and David Bowie, while Greg Hampton’s been working on a new album project teaming up Buckethead and Bootsy Collins.

Who else but Alice Cooper, with ‘Along Came A Spider,’ would create a “love story” about a serial killer named Spider? His trademark is wrapping his victims in silk, and his victims are specifically chosen to feed his hunger to kill. But, upon meeting his (possibly) last victim, he falls in love with her and cannot kill to complete his plan. That could be his demise.

Though it is often said about artists with as rich a history as Alice that their newest albums capture the essence of their greatest work, it may honestly be proposed that ‘Along Came A Spider’ does exactly that. It’s got hard rock with hooks, an Alice trademark (“Vengeance is Mine,” “I Know Where You Live”), classic balladry, another Alice trademark (“Killed by Love,” “Salvation”), and always with an overtone of evil, yet another Alice tradmark. Throughout the album, Alice BECOMES Spider, telling the story of a cold-blooded killer to life vocally, as if this were the soundtrack to an as-yet unmade horror film.

Ozzy Osbourne lends some harmonica work on a track he co-wrote, “Wake the Dead,” and Slash lends some guitar style to “Vengeance Is Mine.”

Before such theatrical rockers as David Bowie, the New York Dolls, Kiss, Slipknot, Rob Zombie, and Marilyn Manson, there was Alice Cooper. The original Alice Cooper group quickly became despised by adults and authority figures, while being idolized by teens and rock fans everywhere, on the strength of a succession of all-time classic albums (‘Love It to Death,’ ‘Killer,’ ‘School’s Out,’ ‘Billion Dollar Babies,’ etc.) and anthems (“I’m Eighteen,” “Under My Wheels,” “School’s Out,” “Elected,” “No More Mr. Nice Guy,” etc.). Alice had continued success as a solo artist, releasing successful albums like ‘Welcome To My Nightmare’ and ‘Trash,’ featuring classic hits such as “Only Women Bleed,” “I Never Cry,” and “Poison.” All one has to do is look at the many other artists that have covered Alice to understand how far reaching his influence is — the list is endless — or just keep in mind that Johnny Rotten auditioned for the Sex Pistols to the tune of “I’m Eighteen. 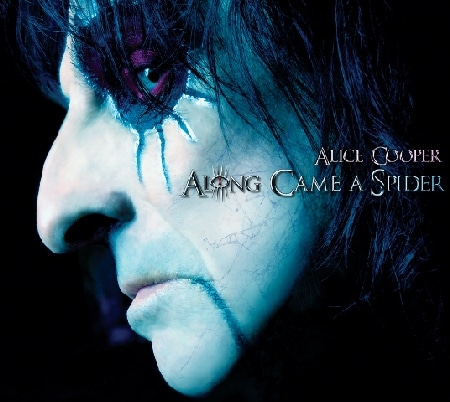 Along Came A Spider Track Listing:
1. Prologue/I Know Where You Live
2. Vengeance Is Mine
3. Wake The Dead
4. Catch Me If You Can
5. (In Touch With) Your Feminine Side
6. Wrapped In Silk
7. Killed By Love
8. Hungry
9. The One That Got Away
10. Salvation
11. I Am The Spider/Epilogue