A rare live performance from Alice Cooper‘s Special Forces Tour in 1982 will soon be available as Live At The Apollo Theatre Glasgow will be released on Record Store Day on October 24, 2020. Only seven thousand copies of the album will be available for purchase.

Track List for Live At The Apollo Theatre Glasgow: 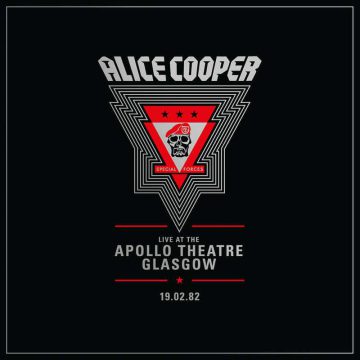 Record Store Day‘s website indicates in part: “Classic performance from Alice Cooper recorded live at The Apollo Theatre Glasgow, Scotland, Feb 19, 1982 on his Special Forces Tour. This recording is largely unreleased: only three tracks — “Who Do You Think We Are”, “Under My Wheels” and “Model Citizen” were previously released as 12″ B-sides in 1982, and have not been available since.”

The songs from Live At The Apollo Theatre Glasgow originate from the following Alice Cooper albums: one song from Love It To Death (1971), one from Killer (1971), one from School’s Out (1972), three from Billion Dollar Babies (1973), two from Welcome To My Nightmare (1975), three from Alice Cooper Goes To Hell (1976), four from Flush The Fashion (1980) and three from Special Forces (1981). Of note, the track “Generation Landslide” appeared as a studio track on Billion Dollar Babies and as a live track on Special Forces.

Alice Cooper performing “Who Do You Think We Are” and “Model Citizen” live at the Capitol Theatre in Passaic, New Jersey, USA on October 10, 1981: