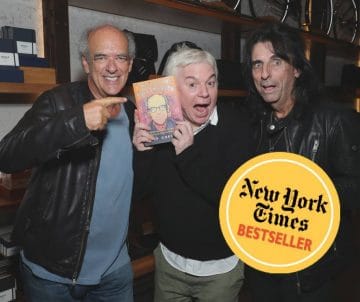 states the following about Gordon‘s history (with slight edits):

“Shep E. Gordon (born 1946) is an American talent manager, Hollywood film agent, and producer. Gordon is featured in a 2013 documentary, Supermensch: The Legend of Shep Gordon, which was directed by Mike Myers…

He first gained connections in Hollywood by meeting Jimi Hendrix, Janis Joplin, and Alice Cooper in 1968. He quickly became Cooper‘s agent, and subsequently was able to do work for other celebrities such as Anne Murray, Blondie, Teddy Pendergrass, and the late Luther Vandross.”

Wikipedia states the following with respect to the documentary Supermensch: The Legend of Shep Gordon (with slight edits):

“Supermensch: The Legend of Shep Gordon is a 2013 American documentary film about talent manager Shep Gordon, produced and directed by Mike Myers in his directorial debut. The film is the account of Gordon‘s career and his clients such as Alice Cooper, Blondie, Teddy Pendergrass, and Pink Floyd. The film also addresses Gordon‘s personal life and his interest in cooking, producing films, and his Buddhist beliefs.