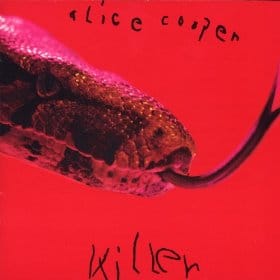 Alice Cooper has gotten to work on his next studio release, and so far it’s shaping up to be a little bit of a killer album.

“I’ve always liked the idea that Alice Cooper has always been a Detroit rock band. We’ve always been a hard rock band, guitar rock, and I’ll never give that up,” Cooper said. “But every once in awhile, though, there’s just a flavor of what album do we want to go to here to give it that flavor. And it seems to be going toward the ‘Killer’ album. And I kind of go, that album, let’s revisit the sound of that album and what we were kind of thinking. You can never go back and totally recapture it, but you can certainly look at the elements that made that album work the way it did.”

It’s early in the writing process, but Cooper said in addition to its sound, what might also connect the next album to “Killer” will be a mini-reunion of the original Alice Cooper Band on the next album.

“I wrote three or four songs with (Alice Cooper Band drummer) Neil Smith and (guitarist) Mike Bruce,” Cooper said. “And so we worked together in Phoenix for about two weeks just writing songs and demoing songs. And you never know which ones are going to make the album, but I said let’s do that.

“Dennis Dunaway (bassist in the Alice Cooper Band) wrote two or three things,” the singer added. “We haven’t seen those yet, but I know Dennis has always written great stuff. It’s fun to go back and work with guys you haven’t worked with in awhile. It’s not trying to recapture your youth. It’s trying to recapture a sound. And it’s a very elusive sound.”

Those three musicians (along with lead guitarist Glen Buxton), of course, played on the original “Killer” album, released in 1971. The album came on the heels of the early hit single “I’m Eighteen” (from the previous album, “Love It To Death”) and included the song “Under My Wheels,” which has become a fan favorite.

The “Killer” album, along with Cooper’s next two albums, 1972’s “School’s Out” and 1973’s “Billion Dollar Babies,” are considered peak Cooper albums that not only established him as a major star, but also solidified his rowdy, garage-ish brand of hard rock.

You can read the entire article on the Weekender website.