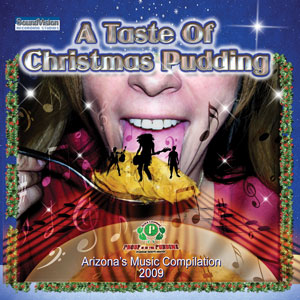 Alice Cooper’s “Taste of Christmas Pudding” CD is in conjunction with Alice Cooper’s annual “Christmas Pudding” show. This years CD includes some great songs. Some high-lights include one original from Dash Cooper’s (Alice Cooper’s son) band Runaway Phoenix as well as last year’s “Proof is in the Pudding” winner No Longer Together and an original track from Greg Chaisson’s (ex-Badlands) new band called Prehistoric Steamroller. It’s his first original material in 10 years.As always, all the proceeds go to Alice’s charity Solid Rock.

In 2005 the first edition of “To The Left Of Christmas” local musiccompilation CD was released. It was started by SoundVision RecordingStudio owner & producer, Michael Beck, as a way to promote some of the valleys localmusic.

“I noticed, while acting as local music director for a valleyrock radio station, that every Christmas, rock stations would be in desperate needfor rock oriented Christmas music. I thought it would be a good chance toget some local bands airplay and help valley radio stations fill that need”,says Beck. It featured well known local bands doing their version of classicChristmas songs. “We have had some great tracks over the last coupleyears, everything from a reggae version of ‘Frosty the Snowman’ to a metalversion of ‘Carol of the Bells’.”

Afterthe 2005 CD, the people at Alice Cooperstown asked Michael Beckand SoundVision Recording Studio’s to combine their efforts with AliceCooper’s yearly holiday “Christmas Pudding” concert, as well as, the “Proof is inThe Pudding” band competition that ends with one local band taking the stagewith Alice Cooper and some of his friends at the Dodge Theater. Thatshow is taking place this year on December 18th.

“The decision to work together, says Beck, was a simple one. I am veryproud to say that it has been a great experience to produce the compilationCD for Alice Cooper’s, “A Taste Of Christmas Pudding, besides, like I’m going to say no to Alice.”

Beck goes on to say, “This years CD promises to be the best yet. Thetalent here in the valley is really unbelievable and working with a charitythat is helping kids relate to music activities in a positive way is sogreat.” The proceeds from the CD will go to Alice’s charity, which is called”Solid Rock”. They are building a much needed music oriented teen center forthe Phoenix area youth.The youth center called The Rock’ will include acoffee house, music venue, and many other music related activities. It is a501-C3 non profit organization. Visit srfrock.org for more information.

“A Taste Of Christmas Pudding” CD track listing:
1. Runaway Phoenix “Ride On Down”
2. No Longer Together “Silver Bells”
3. The Dorsets “Back Door Santa”
4. Prehistoric Steamroller “Keep The Spirit Alive”
5. Secondary Truth “Little Drummer Boy”
6. The Skacas “The Christmas Song”
7. Ray Mill “What Child Is This”
8. Lustmord “Carol Of The Bells”
9. Flying Standby “Christmas In The Desert”
10 .Lisa Savidge “Coming Home”