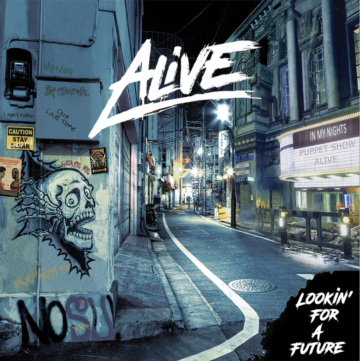 Italian rockers Alive have dropped a video for their new single “Lookin’ For A Future” from their upcoming debut album, which will be released via Volcano Records & Promotion.

Speaking exclusively to Sleaze Roxx, Alive guitarist Simone Aversano was asked how the band got formed in the first place to which he replied: “The band was founded by Giuseppe [Ricciolino] after meeting Marco [Patrocchi], who was the right voice for his songs. Then, we came up “alive” and complete as a real band in the end of 2018.”

In terms of how they ended up hooking up with Volcano Records & Promotion, Aversano indicated: “We were searching for someone to start this new path and to grow up togeter. Volcano is a young and rockin’ italian project… just like us.”

With respect to how they came with their band name Alive, Aversano stated: “We try to keep the passion for this style of music “alive” and, at the same time, it does that with us. In addition, KISS‘ [album] Alive! is a classic! So it sounded well, probably because of it!”

Alive‘s “Lookin’ For A Future” video: