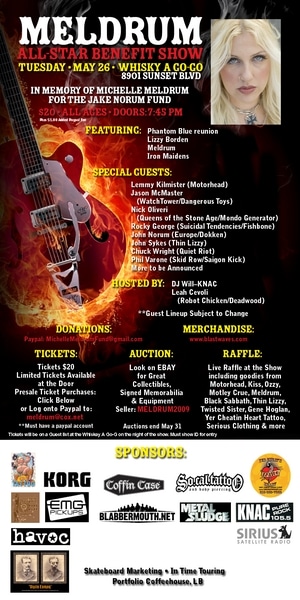 ALL-STAR BENEFIT CONCERT FOR MICHELLE MELDRUM ON MAY 26TH

Michelle Meldrum’s family and son Jake are honoring Michelle and the one year anniversary of her passing with a benefit concert.

On May 18, Michelle Meldrum, leader of the band Meldrum and former Phantom Blue guitarist, was rushed to St. Joseph’s Hospital in Burbank in critical condition. She passed away late afternoon Wednesday, May 21, 2008 as a result of a cystic growth on her brain that had restricted oxygen and blood flow to her brain rendering her brain dead.

Meldrum had just completed writing and recording the bands soon to be released album with drummer Gene Hoglan, along with the new lineup Michele Madden (vocals) and Laura Christine (bass). The surviving band members plan to release the album later this year in tribute to their fallen band-mate.

Those who knew Michelle recognize that she lived every moment for the music, and was regarded as both an exceptional guitarist and a nurturer by her associates, friends, family and son.

Raffle will be held at the event and will include prizes from Motorhead, Kiss, Ozzy, Motley Crue, Black Sabbath, Thin Lizzy, Twisted Sister, Meldrum, Gene Hoglan, Tattoo and more.

Auction will be held the week of the event on ebay include some of Michelle’s guitars and gear, collectibles, memorabilia (eBay seller MELDRUM2009).

Portion of proceeds will be donated to brain research.