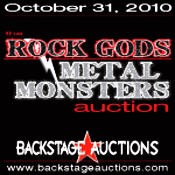 Backstage Auctions is proud to present the “Rock Gods and Metal Monsters Auction”, an unprecedented hard rock and heavy metal online auction event. “Almost every item being offered in the auction is “iconic memorabilia” and is easily identifiable to a specific artist or band,” explains Backstage Auctions founder Jacques van Gool.

“When we designed the hard rock and heavy metal themed auction, we really tried to build an event that was not only unique but give fans and collectors access to pieces of rock history that were equally rare and one of kind and we have definitely achieved that goal,” says Jacques. The auction catalog features over 50 gold and platinum records awards, guitars, drums, gear, stage props, artist stage worn apparel, master recordings, vinyl, handwritten lyrics, rare concert posters and photos and the list goes on and on.

“It’s not an every day event that you can stand behind and grab on to Al Jourgensen’s infamous “skull and bones” microphone stand which he used extensively on many Ministry shows and rehearsals. The historical relevance of that one piece in the rock community is well documented and is going to be one heck of a conversation piece for lucky fan or collector that grabs it in auction,” says Jacques.

Equally impressive is the private collection of Concrete Management co-founder, Walter O’Brien which features a jaw dropping collection of RIAA record awards presented to him while managing Pantera and White Zombie. On a more personal level, Sarzo and Bonnet have both offered up their personal vintage “rocker apparel” that they wore on stage, during photo shoots and really cool music videos back in the day.

The auction wouldn’t be complete without a few guitars, drums, stage props and handwritten lyrics. Amazing pieces that Scott Rockenfield of Queensryche, John 5 of Rob Zombie, Bobby Rondinelli and Kip Winger have pulled out of their personal collections are sure to get quite a bit of activity during the auction.

“While this is a stellar line-up of artists, we are still adding headliners to the event, which is exciting. It will be interesting to see the final line up.” says van Gool.

The event, aptly titled the “Rock Gods and Metal Monsters Auction”, is a not-to-miss opportunity for fans and collectors around the world to own an authentic piece of one of the most significant genres of music history. The auction, which will be held on-line at www.backstageauctions.com starts on October 31, 2010 and will run through November 7, 2010. A special preview of the entire auction catalog will be available to view beginning Sunday, October 24.