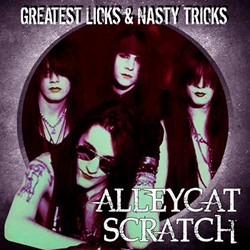 Alleycat Scratch and Robbi Black have delivered once again with a career spanning compilation called ‘Greatest Licks And Nasty Tricks’.

Hearing the call of all the Alleycat’s worldwide, and after receiving hundreds of emails asking for the re-release of ‘Encore’ and ‘Cheap City Thrills’, Robbi Black and Demon Doll Records have delivered the ultimate Alleycat Scratch CD package.

If you’re a fan of “The Hollywood Deadboys” then you will love to sink your teeth into this album — 19 songs of pure unadulterated Hollywood bad boy glam rock ‘n’ roll. Every track ever recorded by Alleycat Scratch with drummer Robbi Black is on ‘Greatest Licks And Nasty Tricks’ including the entire ‘Deadboys In Trash City’ record (with the “Love Song”), the last three studio recordings ever from the ‘Encore’ release featuring “Grave Gina”, “Don’t Forget Me” and “Sick (Of It All)” as well as all five songs from the ‘Cheap City Thrills’ release recorded in 1991 with Tommy on vocals.

As they say folks — that’s all she wrote. Let the Alleycat Scratch legacy live on for eternity and forever hold its peace. It doesn’t get any more comprehensive then this and it’s the coolest way to get all these songs into the hands of the fans for a very reasonable price. From 1991 to 1994, ‘Greatest Licks And Nasty Tricks’ has got you covered once and for all!

‘Greatest Licks And Nasty Tricks’ can be purchased and previewed at www.demondollrecords.com.