Anthrax bassist Frank Bello was recently interviewed by AXS and spoke about a myriad of topics including Anthrax‘s forthcoming live DVD Kings Among Scotland (which will be released on April 27, 2018) and Bello‘s project Altitudes & Attitude with Megadeth bassist Dave Ellefson. 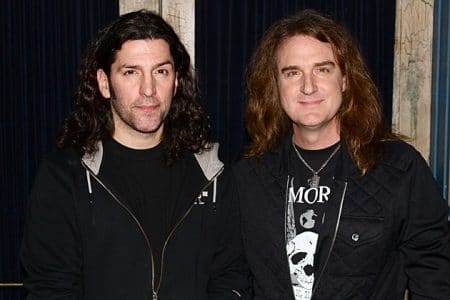 In terms of what the fans can expect to discover on Kings Among Scotland, Bello advised: “The cool thing about this is it is almost two shows in one. There is the best of Anthrax and then you have the whole Among The Living record. I know I am in the band, but I am a music fan and I have to tell you that while we were editing this you could feel the energy from the music and the crowd through the DVD. I watched the whole thing through and it was like being right there at the show. I called everyone that was involved and told them they did such a great job. I am very proud to put this out. For any Anthrax fan or even for people who have never checked out Anthrax, this is the show to see. We have always been a pretty lively bunch on stage and the music is fun. It is the music and the crowd that drives us. We don’t do drugs in Anthrax, the energy during a show is our drug.”

With respect to whether Bello had any plans to revisit his project Altitudes & Attitude with Ellefson, the Anthrax bassist advised: “Thank you for that question. Yes. Dave and I have done a lot of bass clinics together, we work with Hartke bass amps. There was a lot of down time sitting around backstage. Dave comes up to me and said we have all this time at these clinics why don’t we start writing some songs. It was as easy as that and we began writing some songs. I took on the vocals and played rhythm guitar, he played bass and we had Jeff Friedl from A Perfect Circle play drums. People were really diggin’ it and it got great traction on the radio. People wanted more, we only put out a three song EP. But with both Dave and I being involved with our own bands we are on the road nonstop. We finally got together this past year and during our down time we put together a full-length record. It is due out this year sometime around September or October.”

Bello went on to state: “… It is hard rock, it is not metal. It is hard rock with a melody. We are having a lot of fun with it and people are enjoying it.”

You can read the rest of the Part One interview with Bello at AXS.