Swedish heavy metal rockers Ambush have released their first single in four years and it is entitled “Hellbiter.” 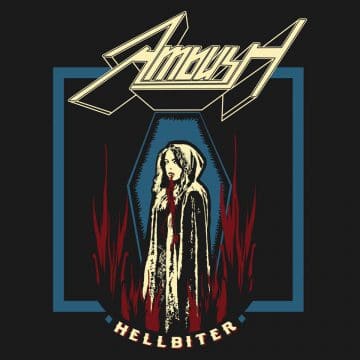 “Beware! Don’t let the album cover for Ambush‘s Desecrator scare you away thinking that this is some sort of death, thrash or black metal album played at an unsavoury breakneck pace (not that there is anything wrong with that but clearly that style of music is not my favorite). Far from it actually. When I stumbled onto the video for Ambush‘s “Southstreet Brotherhood” about ten days ago, I absolutely loved what I heard. Old school New Wave Of British Heavy Metal with lots of melody and the music at an ’80s hair metal pace, what a fucking combination! Although I was still a little hesitant about purchasing Desecrator due to its death metal like cover, I took solace that other great albums such as W.A.S.P.‘s The Headless Children have had odd satanic like covers which didn’t jive with the actual album’s contents and  the song “Southstreet Brotherhood” was just so damn good! By the way, this internal debate only lasted a few seconds…

No need to say that I did end up purchasing Ambush‘s Desecrator and the album has even exceeded my high expectations. Desecrator is the first album that I have heard this year that I love from start to finish and that I simply replay over and over without any hesitation. Yes, I like it that much.”