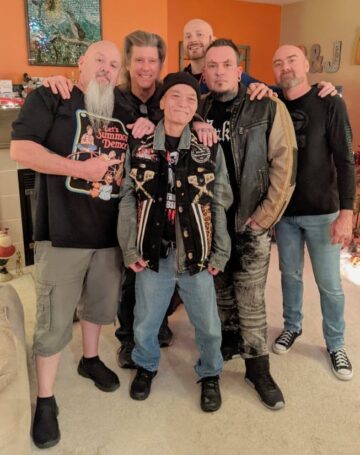 The unexpected happened last night as American Bombshell consisting of drummer Jason Carr, guitarist Andrew “Nix” Nixon and Slick Mick, and bassist David “DJ” Jones, reunited with former lead vocalist Jay Cee for a special surprise intimate gig for their long-time fan Yoshi Baxter who is battling pancreatic cancer. Back in July 2021, Jay Cee announced that he was retiring from the band scene and playing live music leaving American Bombshell without a lead vocalist. The group quickly found a new singer in Jeff Stearns but parted ways with him less than six months later.

Will this special intimate gig for Baxter lead to a full-blown reunion between American Bombshell and Jay Cee? Sleaze Roxx does not have any information in that regard but certainly hopes so.

“Last night we had an incredible time hosting an intimate show for Yoshi Baxter. If you’re not aware, Yoshi has been diagnosed with inoperable pancreatic cancer and is currently undergoing chemo treatments. Yoshi is such an incredible supporter of American Bombshell, not to mention a great friend to all of us. Due to the chemo treatments, not every day is a good one, but we were fortunate to sync up on a good day so we could recharge his batteries with some rock and roll. Jay Cee had also been working on a vest for Yoshi, so it was the perfect opportunity to present him with it, along with one of Jay Cee‘s own jean jackets. It was Yoshi‘s choice for songs, so we ran through Money on the Liquor, More, Tattoos and Booze, Bastard From Birth, No Regrets, and of course Joyride.

If you notice in the pics, Yoshi wrote himself a note about hoping to see a certain someone (we lured him over telling him it was just a practice night). Proof things can happen when you put them out into the world. Special thanks to Scott for coming along and helping out. There is a lot more we plan to do to support Yoshi, so keep watching here as we set up opportunities to give back to someone who has given so much to all of us in the music scene – both locally and across the country. If you haven’t joined Yoshi’s Squad yet, it’s a great place to share, help, and support. #YoshiSquad #YoshiStrong #FuckCancer”