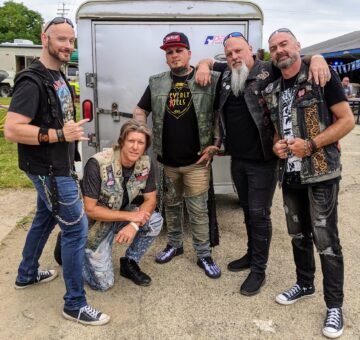 Speaking exclusively to Sleaze Roxx, Carr indicated: “When we last spoke, we were working on some new music while putting out feelers for a replacement for our original bass player Dusty [Green]. During this time, we amicably parted ways with [guitarist] Justin Bryant. While Justin is an amazing player, it just wasn’t the right fit for our style, plus he’s killing it with his Two Notes product, and splitting with us freed up a lot more of his time to dedicate to that.

Shortly before Justin moving on, we got a message from David “DJ” Jones, an amazing talent on bass around the local scene who just so happened to have some free time and recently heard about our open spot. David had actually heard our first album [No Regrets] before anyone else had the opportunity. He was at the same studio tracking bass for another project, and after wrapping up his tracks, Scott — the owner and operator of The Hit Dept — asked him if he wanted to check out a new rock record he had just wrapped up mixing. That record was No Regrets, and David now tells us he was immediately hooked and said to himself “I wanna be a part of this”. Fast forward to six years later and all the cards fall into place. He had done some serious homework on the tracks we gave him to work on, and when he came out for audition he nailed it, and then some — quickly picking up other tunes we threw at him as well as adding his own flavor and style along the way.

At this point, we were toying with the idea of moving forward as a four-piece, but we decided we just couldn’t live without the dual guitar wall of sound and the dynamic possibilities it brings. Rewind to 2017 when we made one of our first trips up to Green Bay for a show. Out in the crowd was a couple who had just dropped in for a few minutes to check out a friends band on the bill. Hours later after our set, they approached us and said “after seeing two songs we couldn’t leave”. We love to hear things like that, and thanked them for sticking around. the next morning I woke up to an email to the band from Lisa Matuszewski telling us she 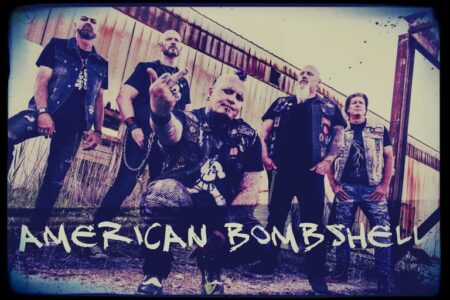 was the wife from the couple we met, and she wanted to let us know what effect we had on them after seeing us. Her husband, Mick had spent many years in bands throughout the ’80s and ’90s — doing the grind, moving to LA — the whole bit. At some point, he found himself extremely burned out and frustrated, as many of us can attest to and understand. This is not an easy profession. Lisa said when her husband went home, he pulled out his guitar and started playing — that we had rekindled his fire for playing music, which was incredible to hear and very humbling.

From that point on, we became close friends between us staying with them when we were up north or them making the trip to our neck of the woods for shows. Lisa dove in headfirst helping out with the Bomb Squad and organizing a fundraiser for our Merch Vault after she took care of our woefully inadequate merch booth one night [laughs]. Jumping back to present day, we had joked with Lisa and Mick about him trying out for the slot, but the reality of a six hour distance between us and them seemed to be an insurmountable hurdle. Around the beginning of 2021, we started having some more serious discussions about it, them expressing their willingness to relocate if it made sense. We invited them down for a weekend to see how the musical chemistry felt. This being a huge decision for them, we wanted to cover all the bases. It sounds cliche, but for the four of us already here… We knew from note one, it was a perfect fit. It was really hard stifling the grin throughout the sessions because we wanted Mick to get his own honest feeling for it as well. A little over a month later, Mick and Lisa made the move to Indiana and currently live about five minutes from our practice space. Along with DJ, “Slick” Mick has added a whole new dimension to the band, and we cannot WAIT to get in front of each and every one of you.”

American Bombshell‘s “No Regrets” video (from No Regrets album):