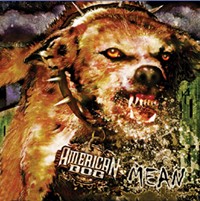 American Dog frontman Michael Hannon has revealed that the band will be entering the studio to record the AC/DC classic “Givin’ The Dog A Bone”.

Hannon said, “On Wednesday we are going in to Sonic Lounge Studios to record a cover of AC/DC’s “Givin’ the Dog a Bone” for Classic Rock Magazine’s Tribute CD to ‘Back in Black’. There will be a different band doing each song, and will come with the May issue. While we’re in there we’re going to record a new original we’ve written as well. It’s about getting laid in the Ladies Room at a Bar!!! tentative title?….”Good Time”!!!”

American Dog recently released their new album ‘Mean’, the follow-up to 2007’s ‘Hard’. A deluxe version of ‘Mean’, complete with a ‘dog-tag’, sticker and autographed poster, is available for purchase at www.americandog.us.