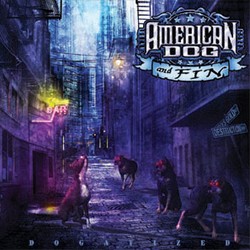 American Dog Team Up With Original Waysted Singer On ‘Dogatized’

Ohio based rockers American Dog have teamed up with original Waysted singer Fin Muir on ‘Dogatized’, a brand new album now streaming in its entirety at capitalcitymusicfactory.com/album/american-dog-and-fin-dogatized.

When the recordings for what would eventually become ‘Dogatized’ started years ago, UFO and Waysted bassist Pete Way had done a couple of solo recordings in Ohio. Knowing his time at home would be limited, and wanting to start something else, the members of American Dog figured an album of cool cover songs with Pete singing would be a blast. That’s when American Dog went to work and cut the music for four of the songs that appear on ‘Dogatized’. However, with fate being the fickle creature that it is, the untimely passing of Pete’s beloved wife Jo, and immigration issues, this project was left like a dog on the porch waiting for its master’s return.

Once again fate stepped in, in the form of Fin Muir (Pete’s bandmate in Waysted) and this album happened the only way it could. Fin arrived in Columbus, Ohio to work on a recording of a Tommy Bolin song for a charity project benefiting addiction. While he was here, he just happened (accidently on purpose) to be given a CD of this material. A meeting was set, a marriage arranged, and Muir was back in Ohio putting vocals on these outstanding arrangements that were put together by American Dog frontman Michael Hannon and the boys in the band.

News of the collaboration first surfaced in late 2009 when Hannon stated, “What happened was we recorded 4 cover tunes for Pete Way back in 2005 for an upcoming solo album he was going to release… since then Pete has had passport problems and can’t get into the States to finish this project up. So enter Fin, who was doing some work with the Quiet Riot guys at the same studio we were working in. Fin heard the recordings we did for Pete and loves ’em, so he calls Mr. Way and he sez DO ‘EM!!!”

American Dog was formed in 1999 and features ex-Salty Dog and Dangerous Toys bassist Michael Hannon on vocals and bass, Steve Theado on guitars and Michael Harris on drums. The band’s latest full-length studio album, ‘Poison Smile’, was released on May 25th, 2012 through Bad Reputation Records. Regarding ‘Poison Smile’ Sleaze Roxx stated, “The American Dog blueprint was written years ago, and while they have streamlined their sound over the course of their career, the message remains clear… get drunk, bang heads, or get the fuck out of the way. And like the song “Old Dog, New Tricks” states, “Nothin’ broken, ain’t nothin’ to fix/can’t teach an old dog new tricks” — so why change the formula now?”