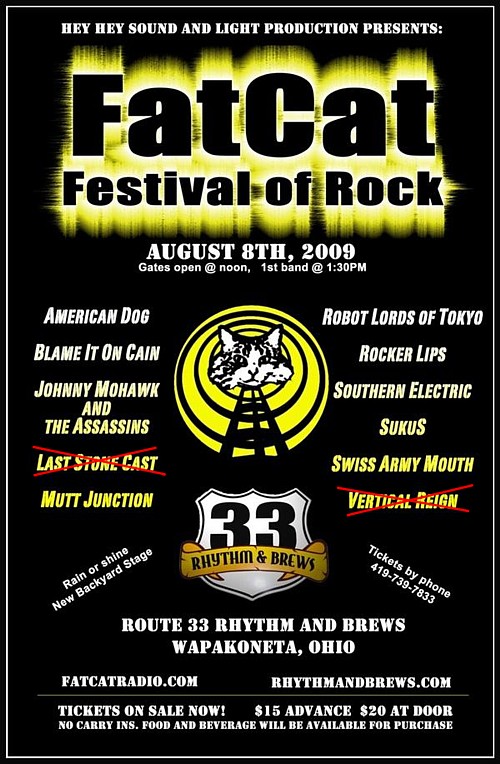 On Saturday August 8th, 2009 Route 33 Rhythm and Brews in Wapakoneta Ohio will host the FatCat Festival of Rock, an event featuring 9 independent rock bands from throughout the Midwest. The Festival of Rock was conceived and organized entirely by the fans and the bands for the benefit of Rockford, IL based internet radio station, FatCat Radio (www.fatcatradio.com). The FatCat Radio Network is owned and operated by ‘One Angry Swede’ and wife ACDCJen and has been supporting independent rock and blues since 2001.

The last of a dying breed, Route 33 Rhythm and Brews is a World War II-era rural highway roadhouse that is situated on the outskirts of Wapakoneta, OH near the corner of “old 33” and Kettlersville Rd. The building has undergone several amalgamations over the last half-century but since 1997, under the passionate guidance of proprietors Ron and Terry Lininger, it has served as the premier smallentertainment club in Northwest Ohio. The Festival of Rock will take place outside on the new Backyard Stage.

For ticket purchases over the phone using Visa or MasterCard call 419-739-7833 Tuesday through Saturday between the hours of 4pm – 9pm Eastern.

Route 33 Rhythm & Brews is located on County Road 33A (also known as Plank Pike) between Wapakoneta and St. Marys, Ohio. 60 miles north of Dayton, 70 miles south of Toledo, 90 miles west of Columbus, and 70 miles east of Fort Wayne, IN

All attendees will be issued wristbands to allow you go to come and go through out the afternoon / evening. Be one of the 1st through the gates and get some FREE STUFF from the FatCat Radio Prize Vault! (additional details coming soon) This is an outdoor event, seating is limited, so if you’ve got a lawn chair it might be a good idea to bring it! No carry ins allowed however. PLENTY of the famous Rhythm and Brews food and (everyone’s favorite) ALCOHOL will be available for purchase on site.