Great news for American Dog fans as the group will be releasing a double album titled Unfinished Business on December 7, 2017 consisting of a best of album and a live unreleased recorded US tour. 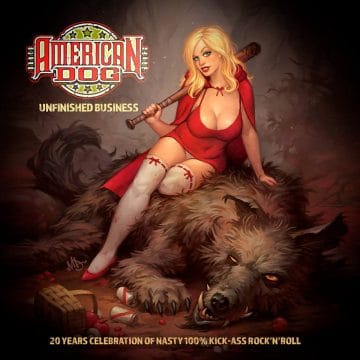 “You thought he was buried? American dog comes back with a double cd celebrating his 20th birthday. A best of, a live unreleased recorded during the us tour of Tesla, unreleased, short party at 100 % KICK ASS ROCK ‘n’ Roll!”

Their coarse, high-energy brand of rock and roll is often compared to Motörhead and Ted Nugent. Blistering live performances and a stubborn refusal to compromise their music are hallmarks that have earned them die-hard fans all over North America and an even larger following abroad. The band has toured Europe extensively more than a dozen times, with visits to The United Kingdom, and Asia as well, enjoying tremendous success in France, Belgium, Germany, Holland, England, Switzerland, Spain, Czechoslovakia, and Japan. American Dog has recorded seven studio albums and released eleven overall. They recently completed their first recording as a four-piece band entitled, Neanderthal, which will be issued in June 2014.