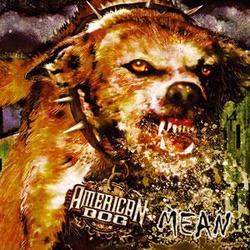 The new AMERICAN DOG CD ‘MEAN’ is now available for pre-order at www.americandog.us.

‘Mean’ is being sold in two different packages – the standard CD release and a deluxe CD package that includes an autographed poster, a sticker and an American Dog “Dog-Tag”. ‘Mean’ is slated for a January 10th release through Bad Reputation Records (www.badreputation.fr).

Not only will the “Mean” CD arrive in January, we’re doing an album with Fin Muir, who is/was the singer from the band “Waysted”, which was started by UFO bassist Pete Way…

What happened was we recorded 4 cover tunes for Pete back in 2005 for an upcoming solo album he was going to release,…since then Pete has had passport problems and can’t get into the States to finish this project up…..So enter Fin, who was doing some work with the Quiet Riot guys at the same studio we were working in,…..Fin hears the recordings we did for Pete and loves ’em, so he calls Mr. Way and he sez DO ‘EM!!!.

So we’ve written 5 originals, and another cover song and this CD is being recorded starting next weekend, Fin is arriving Monday, we’ll rehearse for 2 days and then go into the Studio on Friday and start recording.

These recordings will be shopped to the labels.

We’ll be heading to Europe in March for a string of shows, the to the UK in June,….We’ll also be recording the second “Six Pack” CD this summer,…With a horn section!!

Other than that, not much happening.”