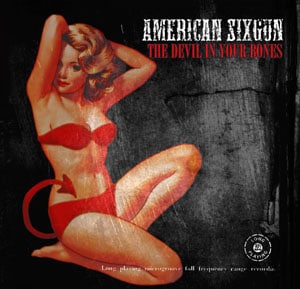 AMERICAN SIXGUN ‘THE DEVIL IN YOUR BONES’ SET FOR NOVEMBER RELEASE

AMERICAN SIXGUN is set to release their debut full length album “The Devil In Your Bones” on November 24th through Eulogy Recordings (www.eulogyrecordings.com). They posted a couple of new tracks from their upcoming album on their Myspace page www.myspace.com/americansixgun. They also posted a very unique commercial, check it out, CLICK HERE.here. Pre-order deals are currently available which include special limited edition hand painted CD’s by the band. AMERICAN SIXGUN will be hitting the road supporting Sponge in December.

American Sixgun Bio:
American Six Gun formed in April 2009. Over the next three weeks ASG wrote and recorded the demos that would become “The Devil In Your Bones”. ASG sent the demos out to a few A&R and one month later they were signed to Eulogy Recordings. Two weeks after that the band was invited to perform for a month on the Vans Warped Tour as a variety band along side other cross over tastes like Shooter Jennings and The Gallows. While on Warped ASG made fans in a variety of genres chanting “Fuck 3oh3 and Millionaires” everyday from stage. Catching the attention of larger acts on the tour ASG was invited to support dates later in the year. ASG’S debut album “the Devil In Your Bones” will be released worldwide in November of 2009.