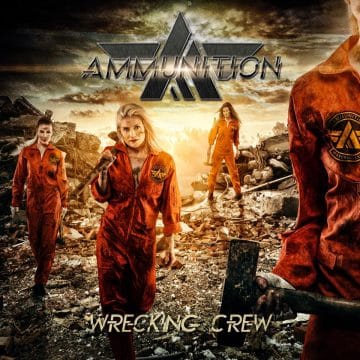 Ammunition featuring former Wig Wam singer Åge Sten Nilsen and Eclipse frontman Erik Mårtensson (on guitar) have released the first single “Wrecking Crew” for streaming along with a video teaser for the track. The single comes from the band’s upcoming sophomore album, which will be released later this year.

Sleaze Roxx stated the following in its review of Ammunition‘s debut album Shangaied: “Ammunition‘s Shanghaied album essentially picks up where their amazing live performance left off. The songs that I instantly liked at Rock N Skull — the absolutely “goose bump” variety ballad “Road To Babylon” and the gospel like “Take Out The Enemy (Hallelujah)” — turn out to be some of the highlights for sure. However, what I was not expecting was the depth of the material and how many standout tracks Shanghaied indeed contained. I readily admit that I am not the biggest melodic rock fan preferring the sleazy grimy variety most of the time but I have always thought that really really good melodic rock with an edge may well be the best of all. There are only a handful of bands (H.E.A.T and Eclipse come to mind) that have achieved that lofty criteria in my eyes and only for select albums and Ammunition are now part of that elusive group. “