Ammunition featuring former Wig Wam singer Åge Sten Nilsen and Eclipse frontman Erik Mårtensson (on guitar) have announced that the first single from the band’s sophomore album Ammunition will be released in February 2017. 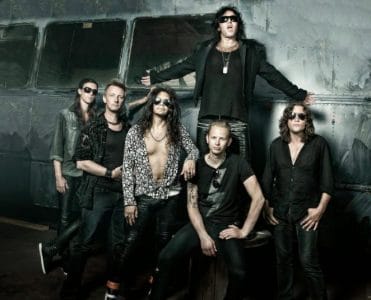 Sleaze Roxx stated the following in its review of Ammunition‘s debut album Shanghaied: “What makes Shanghaied such a great overall album is that there are only good tracks on it — with a hefty twelve in total — and at least half are of the stellar variety. “Do You Like It” has one great chorus which will make it virtually impossible for you not to sing along to it. “Shanghaied” is a moody rocker with another great uplifting chorus and some cool guitar parts. Sten Nilsen‘s vocals truly shines on this song. “Wild Card” is pretty much a melodic rock fan’s wet dream with slowed down verses and another catchy sing along type chorus. “Tie Me Down” is the kind of track that you’ll be singing along to and one of the heavier songs on the album. The rest of the songs on Shanghaied are all good ones and none that I would consider of the filler type. Ammunition‘s debut album Shanghaied is a must pick up for anyone who loves quality melodic rock with a bit of an edge.”

The following message was posted on Ammunition‘s Facebook page yesterday:

“HAPPY NEW YEAR FROM THE AMMUNITION CAMP !! A big salute to everyone who has supported us so far.

We are happy to announce that the first single from our forthcoming album “AMMUNITION” will have it’s release in February 2017. Here’s a little throwback firecracker from #rocknskull2016 Illinois, USA.”