Scottish rockers Anchor Lane will be releasing their debut album Casino on January 31, 2020. It is available for pre-order at the band’s website. 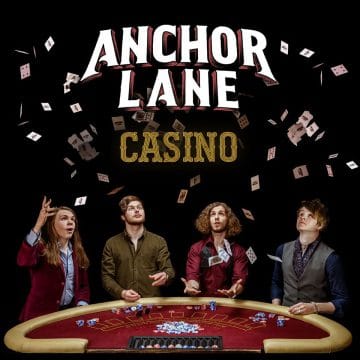 “Scottish rock band Anchor Lane have today released more material from their stunning debut album ‘Casino’. The title track is now available from all major digital and streaming services ahead of the album’s official release on the Friday, 31st January 2020. Packed with immense sounding up-tempo tracks it showcases the band as exceptional rock musicians and skilled songwriters. Pre-order your digital download of the album on iTunes or pre-save on Spotify to access the track ‘Casino’ ahead of the official album release!

Casino is a sonically exhilarating album from the band who take influences from Royal Blood, Nirvana, Soundgarden and The Foo Fighters.

On working with producer Toby Jepson, Conor said, “We learned so much from Toby. His ability to take a song and flip it on its head was so inspiring to us.”

Toby said, “Before I commit to working with a band, I need to get a sense of whether they have a genuine vision and something to say. When I heard the demos I knew there was some intuitive and intelligent writing going on.”

On writing with Ricky Warwick, Lawrence said, “Ricky’s direct approach to song writing was fascinating. He taught us to accept the simplicities and imperfections in the songs and it made them stronger.”

Ricky said, “Anchor Lane are everything a rock band should be. They have attitude, ability, swagger and most importantly songs… their passport to a very bright future is assured.”

Despite being in their early twenties, there’s a maturity to Anchor Lane’s song writing. They don’t shy away from tackling difficult subjects as Casino’s themes include toxic relationships, addiction and the death of a close friend….

The album’s title is a metaphor for the ever-changing music industry explained Matthew, “We called the album Casino because in this industry, you either go all in or you leave the table. We gladly left our jobs to concentrate on writing the album. It’s a high-risk high-reward gamble but we’re here for the right reasons.” Toby Jepson adds, “When I met the guys, they said ‘We want to change the world, we want to write something that makes a difference.’ They’re ambitious with strength of character and real vision. This is their first album and judging by the material they’ve come up with so far, they have a very big future.”

Anchor Lane came to the public’s attention in 2017 with the release of their 4-track EP New Beginning. Since then, they have toured incessantly scoring notable guest spots with Cheap Trick, Eagles of Death Metal and Tremonti. The band has garnered an impressive reputation as a thrilling and dynamic live act and have notched up significant appearances at renowned rock festivals including Download, Isle of Wight, Stone Free, Belladrum and Hard Rock Hell.”

Fame Shame is the first single from the hugely anticipated debut album by Anchor Lane which was produced by Toby Jepson (Wayward Sons, Gun, Little Angels).Vi…