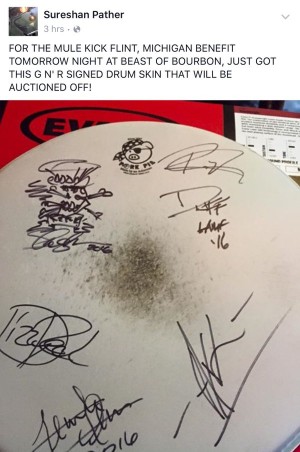 It appears that the “reunited” Guns N’ Roses line-up is no longer a mystery.

Blabbermouth reported the following about an hour ago:

“A brand new GUNS N’ ROSES autographed drumhead has been donated by the band to be auctioned off at a benefit concert for the people of Flint, Michigan who were affected by the water contamination crisis.

A photo of the drumhead — which apparently features the signatures of singer Axl Rose, guitarist Slash, bassist Duff McKagan, keyboardist Dizzy Reed, drummer Frank Ferrer and guitarist Richard Fortus — can be seen below. The picture was tweeted by Canadian rock journalist Mitch Lafon after it was originally posted by Sureshan Pather, who is apparently involved in the auction.

The concert, which will be held on Tuesday, March 15 at Beast Of Bourbon in Brooklyn, New York, will be headlined by MULE KICK, which features Ferrer alongside Rob Bailey, Rob Clores and Brett Bass.”

The entire story can be read at Blabbermouth.

Many fans will likely be disappointed with this line-up if it is indeed the “reunited” Guns N’ Roses that will be playing various tour dates and festivals in 2016. Guitarist Izzy Stradlin and drummer Steven Adler are missing and were part of the classic Guns N’ Roses line-up that played on Appetite For Destruction. Drummer Matt Sorum who played on Use Your Illusion I and Use Your Illusion II and who has played with McKagan and Slash in Velvet Revolver is also missing from the line-up.

Rumours continue to swirl surrounding the “reunited” Guns N’ Roses with a number of possible tour dates and stops for 2016 having recently surfaced a couple of days ago.