Lies, Deceit & Treachery and former BulletBoys lead guitarist Mick Sweda was interviewed by Ruben Mosqueda for Sleaze Roxx yesterday (on August 28, 2019) and the interview will be published in the coming days. 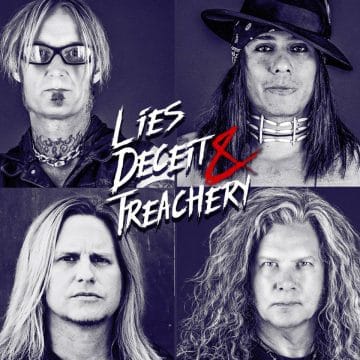 The following is an excerpt from the interview with Sweda as the guitarist provided an update on the status of Lies, Deceit & Treachery and revealed that he jammed two days ago with his former BulletBoys bandmate Marq Torien. Sweda advised:

“We did two cruises [Monsters of Rock], we have been talking about making a record, I’ve sent Andrew [Freeman] a couple of tracks and he’s sent back a couple of vocals. When he’s in three other bands and your drummer is in three other bands, they have other obligations. Something has to get put on the back burner and ultimately that is L.D.T. [Lies, Deceit & Treachery] about a month ago I said, “If we’re not doing L.D.T., then I’m moving forward with The Hot Summers and other stuff that I’d like to do. You guys can do your projects and I will move on and it’s all good.” That apparently didn’t go over too well. We had two shows lined up in Canada. Those wound up getting cancelled. We also had this Denver, Colorado show and that would be our last show. This all went up in flames. I jammed with Marq Torien last night [August 27, 2019] in LA. We jammed on “Rock Bottom” and Andrew Freeman took exception to that and he quit the band today [August 28, 2019].”

Back in May 2018, Sweda was interviewed by Tyson Briden in a three part interview for Sleaze Roxx and stated as follows in part one of the interview about Lies, Deceit & Treachery‘s plans to release a full album: “Yeah. In fact we’re talking to a couple of different labels right now. We’re getting material together. It’s going slower than I prefer. One of the guys is in Vegas. One’s in Houston. Jimmy and I are here. So the process sort of has to find its momentum. We’re doing that now. Everybody’s sort of recovered from the [Monsters of Rock] Cruise and the gig surrounding that. As I mentioned, we’re now putting the material together.” In terms of who was going to be singing on the album, Sweda advised at the time: “Well, Andrew Freeman is the guy we’ve been working with. Hopefully, if everything goes well, he’ll be the guy on the record.”

Stay tuned for the interview with Mick Sweda by Ruben Mosqueda on Sleaze Roxx!