Guitarist Andy Basiola has released a lyric video for his song “The End Of The Road” featuring Gaz Twist from his upcoming debut EP Behind The Illusion, which will be released on January 19, 2018.

Basiola‘s “Biography” on his Facebook page states (with slight edits): 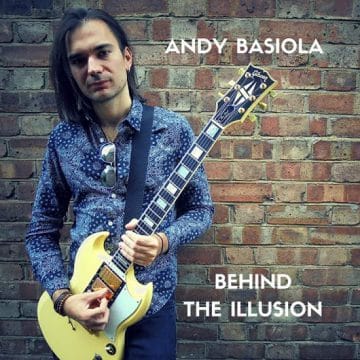 “Andy Basiola is an italian guitarist with more than 12 years of experience, based in London, UK. Andy started playing guitar at the age of 12 growing up listening to artists such as Randy Rhoads, Jimi Hendrix, Gary Moore, Eric Johnson, Joe Satriani, etc…

In 2009, Andy moved to London, after winning a scolarship to study at Tech Music School, one of Europe’s leading music college, where he graduated in 2010.

Over the years, Andy has played and toured Europe with a number of different bands and played some of London’s iconic venues, such as: 02 Shepherds Bush Empire, 02 Islington, 100 Club, Beck Theatre, Barfly and Underworld.

In London, Andy has been writing and recording music with rock bands Kill for Eden and Future Shock.

In 2012, Andy was voted Best Individual Performer, by Playmusic Magazine, in the same year he received a guitar endorsement deal with Fret King Guitars.

In the same year, Andy has also been selected to take part in the “Vivaldi Metal Project” album, a project involving musicians from all over the world including Rick Wakeman (Yes), Mark Boals, Michael Lepond (Symphony x), Atma Anur and many more. http://www.vivaldimetalproject.com/

Andy is also an experienced guitar teacher and teaches regularly in some of London’s best music schools and also privately.”

Andy Basiola‘s lyric video for “The End Of The Road” feat. Gaz Twist: