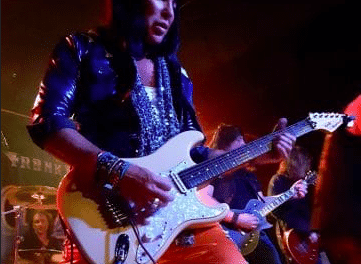 Both Angel and KISS were amongst the first acts that were signed to Casablanca Records in the early to mid 1970s.

Meadows was asked why the offers that he received to join KISS, Aerosmith and the New York Dolls never came to fruition to which he replied (with slight edits): 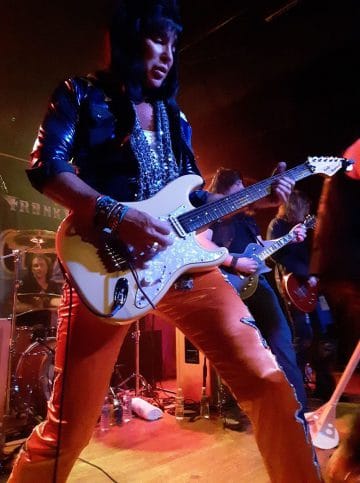 “Well, what happened with KISS was, Angel had broken up and Gregg [Giuffria] Barry and I stuck together. We put a band together with Ricky Phillips from The Babys and Fergie Frederiksen, who was a great singer, too, and Gregg and myself. So, we put this band together and were getting ready to shop a deal. KISS and Gene [Simmons], those guys all loved me so much; they always raved about me. And I loved them, too. Gene and Paul [Stanley] were in the studio recording and Barry Levine was their photographer. He did all the pictures for KISS and Angel and he was a friend of ours, too. He was in the studio with Gene and Paul, so he calls me up one day. He said, “Hey, Punky. I guess you heard that KISS is looking for a guitar player.” They put an ad out in some music paper in L.A. and they had some people come down and audition. So, Barry says, “I mentioned your name to Gene, and he said, ‘That’s a great idea!’” So, Barry Levine called me and said, “They’re looking for a guitar player and Gene thinks it would be a great idea if you sat in with him and played.” I said, “Well, have Gene call me.” So, Gene calls me up and says, “Hey, yeah, it would be great to have you come and play with the band.” He said, “Just learn one side of the KISS Alive! album. Doesn’t matter which side it is. Any side.” So, I had to tune my guitar a half-step down because they always did; I never did. [Laughs].

So, I learned a couple of their songs and said, “Okay, I’ll go down,” because Gene asked me to go and we were friends. I went down to SIR Studios, I think that’s where it was, and I walked in and they were playing “Communication Breakdown” by Led Zeppelin. It was just Paul and Gene; Eric Carr was on the drums. So, I walked in and I plugged up and played. It went great; sounded great. So, Gene comes over to me and says, “Let’s sit down and talk business. You got the gig.” I said, “Well, Gene, you know, I have to talk to Gregg first. Gregg and I are getting ready to shop a deal. I have to talk to him first.” As soon as I said that I insulted Gene, I guess. Gene got up and said, “Come on, Paul. Let’s go.” So, they left. They stormed out. Then I went home and Barry Levine calls me up and he goes, “Punky, what’d you do?” I said, “What do you mean?” He goes, “Paul and Gene came back with their jaws to the floor. Gene said no one’s ever turned down KISS!” And I said, “I didn’t turn them down, Barry, I just said that I was with Gregg, we put this band together and were getting ready to shop a deal, and he just left.” He goes, “They were gonna give you $200,000 a year plus points.” At the time, I was broke. I said, “Well, I didn’t mean to do that. I don’t know what to say.” So, that was the end of that; I never followed back up on it.

I wasn’t gonna go groveling to them or anything like that, because I did owe it to Gregg. Gregg and I, we did the demos with Fergie and Ricky with Andy Johns and it came out great. That’s actually when I had Ron Rainey, who’s my manager now, he managed Gregg and I then. So, he got us an audition to play for a record company, so we rehearsed down there. All these record companies heard the demo and came down to see us. They just wanted to see us play live, that’s all. We would have signed another big record contract. We go out there to play on stage, and for some reason, Fergie couldn’t, he froze up. It was the weirdest thing in the world. We hit the first chord and he just doesn’t sing. I go, “What the fuck?” And he runs off the stage and leaves. We’re sitting there playing in front of Capitol Records, Columbia, everybody at A&R, Geffen, all that shit. We just played two instrumentals and that was it. We blew that. Well, Fergie blew it. Afterward, Ron Rainey and some of us, we sat with Fergie and said, “It’s OK, Fergie. We understand.” I don’t know what happened with him, though; I don’t know if he was intimidated or what, because he had been on stage and opened up for a lot of big acts with his other bands and stuff. I think he played with Toto at one point, too. He was a great singer, but I don’t know what happened. So, that was the end of that.

Then, Aerosmith, David Krebs called me up. Of course, you know, Joe [Perry] and Brad [Whitford] had left. I think they had Rick Dufay at the time, but they didn’t have Jimmy Crespo yet. But David asked me if I wanted to play with Aerosmith at the same time I was still with Gregg. Unfortunately, I was loyal, which turned out to be a mistake, in the end, I guess. So, I didn’t say no, but I didn’t say yes. I didn’t jump on it. So, that’s how that ended. But David and I stayed in touch for a long time after that; he tried to get me to play with Michael Bolton at one time. When Michael Bolton first came out, he came out as kind of a heavy, hard rock guy with black leather and David thought I’d add another dimension for Michael Bolton. So, I was thinking about doing that, too, but that never came to fruition, either.”

You can read the rest of the interview with Punky Meadows at Vinyl Writer Music‘s website.