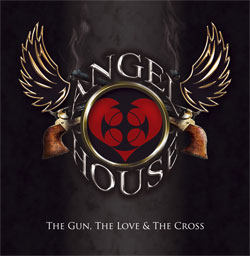 ANGEL HOUSE RELEASING ‘THE GUN, THE LOVE & THE CROSS’ ON NOVEMBER 20TH

UK band Angel House release their new CD The Gun, The Love & The Cross onNovember 20th. A track from the new album can be previewed at www.escape-music.com/coming.htm.

Birmingham has always been recognised as producing famous rock and heavy metal bands, Black Sabbath being the most notable,and of course the great Magnum. Following in the tradition of such household names is Angel House, a band who play their own brandof hard rock music, with a 70’s and 80’s influence. They already have a great following thanks to their awesome live set. They haveopened for such bands as Blue Oyster Cult, Tyketto and Mountain as well as headlining their own tours.

In 2004 due to popular request they produced a two track single featuring the fan’s favourite – Superstitious Woman – and managed toget airplay on BBC Radio and Radio Gets Wild. They won an award on RGW and they shared the best band slot with Las Vegasband “Dark Life”. They are held in high esteem, especially in the USA where they have toured the west coast.They have since gathered an army of fans due to sheer determination.

In 2007 they released their debut album “World on Fire” produced by Mark Stuart of Magnum fame. The release saw the band receiveexcellent reviews and has prompted some to predict the re-emergence of a new strain of NWOBHM with Angel House leading the way. The band, consisting of only three members; Pete, Simon and Phil are regarded as a no-nonsense trio who just get on with the job in hand.

After recent appearances in the UK with bands such as Tygers of pan tang, John Waite and Von Groove, Angel House have returnedto the studio and are poised to release their second album “The Gun, The Love and the Cross”, once again with producer Mark Stuart.Set for release later this year the new songs are much stronger than on the first album and have already been aired live to fantasticreaction, Angel House are a band to watch out for.