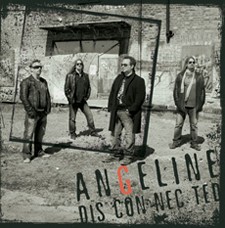 Swedish Rock band Angeline celebrated the release of their new album ‘Disconnected’ with two release shows and parties in their home country during the last weekend of November. ‘Disconnected’ is the second full-length album by the Swedish rockers and will be released on December 9th, 2011 on the Avenue Of Allies label — www.avenue-of-allies.com.

The audiences at their gigs in the bands hometown Ljusdal on November 25th, and two days later in Sweden’s capital Stockholm, saw the band perform some Angeline classics and eight songs from their brand new album ‘Disconnected’.

The band is currently climbing the charts on Reverbnation. Their song “Falling Into You” now holds position #8 on the local Swedish charts and can be heard at www.reverbnation.com/angelinetheband.

Angeline looks back on a vivid band history of more than two decades. After the band’s foundation back in 1987, when most of the boys were still in their teens, they played their first gigs together. Inspired by the unexpected success of ‘Confessions’ (2010), their first full length album of all original new material, the Swedish band Angeline now delivers the much anticipated follow-up ‘Disconnected’.

This album now picks up where ‘Confessions’ left off, and with only two albums under their belt the band has managed to create its very own sound. It’s a unique combination of melodic rock, a genre that was popular when Angeline first started out more than twenty years ago, with super catchy hooklines, multi-layered harmonies in Harem Scarem fashion and a healthy dose of modern rock, which shows their wide range of influences from bands such as Daughtry, 3 Doors Down and the recent Bon Jovi albums and for good measure a bit of the retro hard rock sound a la Airbourne and Bullet is added.

The album features a crisp and powerful production by the band’s guitarist Jocke Nilsson and a state-of-the-art mastering by Bjorn Engelmann (Stage Dolls, Wig Wam, Within Temptation, Williams/Friestedt).